Today would have been Biz’s 33rd birthday…  I still miss him, of course, but it doesn’t hit me as acutely now, a few weeks later.

A few days after Biz died, our local Humane Society started a fundraiser.  For a minimum donation of $20, you could have a portrait done of your pet by one of their volunteer artists.  The catch?  You get what you get, as the “talent” of the artists runs the spectrum, and your portrait would be randomly assigned.  In other words, it’s all in good fun and for the animals!  I made my donation, and emailed a photo of Biz that I like.

This is that photo.  I took it of him in February 2018 when we were standing outside the vet clinic waiting for them to get ready to do his dental work.  He was a bit on edge, and it was a cold, slightly foggy day, but his expression was so regal!  Even in his old age – he was 31 in this photo – he was still a beautiful horse. 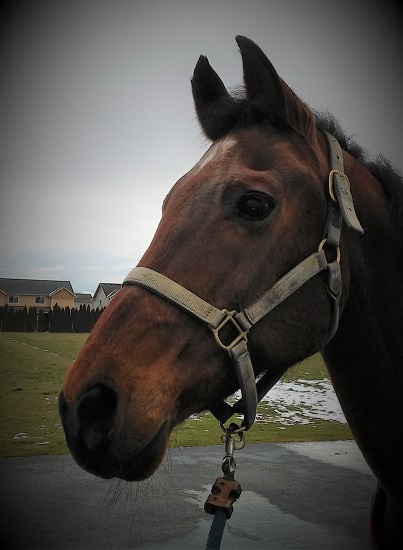 Biz, looking regal before the sedative…

I received my finished portrait last week, and I was overcome with how good of a job she did!  I am so impressed at how well she captured his likeness! His curly forelock and mane hair, his white star that got bigger as he became an elderly boy, and even his slightly hanging upper lip.  It is perfect!

I’m beyond the moon to have this memento of my boy.  I hope he’s having fun playing beyond the rainbow bridge.