I picked up Mary Todd Lincoln, A Biography, by Jean H. Baker, at the Mary Todd Lincoln House in Lexington, Kentucky, when I visited there in August 2018.  I have read a lot about Abraham Lincoln, and have learned much about Mary in the process, but I have never read anything that explores her life as her own person, separate from her relationship with our nation’s 16th President. 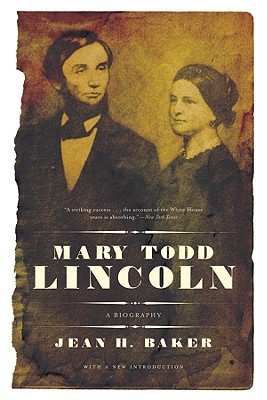 The book covers the entirety of Mary Todd Lincoln’s life, from her birth and upbringing in Lexington, Kentucky.  Her mother died when Mary was six, and her father remarried shortly after to Mary’s step-mother, a woman that Mary had a tumultuous relationship with.  She went to boarding school across town, and received far more education than a girl typically received at the time.  She was versed in politics and could speak eloquently on a variety of topics, in both English and French.

She was, by all accounts, a formidable force, who had strong opinions and a pushy nature.  However, it is likely that Lincoln’s rise to the Presidency was heavily influenced by his wife, her encouragement and her assistance behind the scenes.  She believed she would be the First Lady, and Mary Todd Lincoln often got what she wanted.

Her life was also overshadowed by tragedy.  She lost her mother as a child, and three of her four sons died before they reached adulthood.  And of course, you know what happened to her husband…  She grieved.  Yet she grieved in a way that the nation thought inappropriate, not becoming of a lady of her time.  She was too much to take.

Mary’s polarizing personality bought her many enemies, and those enemies have tainted the historical record.  She certainly was far from perfect, but this biography will help the reader to understand what is true and what is myth surrounding Mary Todd Lincoln.