The Girl With The Lower Back Tattoo, by Amy Schumer, wasn’t a book I set out to read.  But it was available in audiobook format on an evening I went looking on the library website for books for my commute.  So there you go… 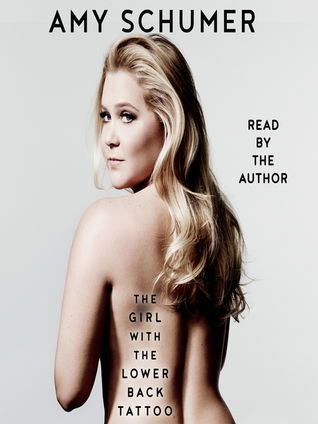 Amy Schumer is a comedian and actress, who is known for letting it all hang out.  She will say what’s on her mind, in excruciating detail.  She is crass, inappropriate and often laugh out loud funny.  But she certainly has a style that isn’t for everyone.  I’ve known about her for a while, but I’m not really into comedy or slapstick type movies, so I must say, I haven’t seen much of her comedy.

In her memoir, she once again lays it all out there, from her upbringing with dysfunctional parents, her self-esteem issues and what it is like to be a female comedian in an industry still largely dominated by men.  She talks about her career and how she got to where she is, from her teenage job as a summer camp caregiver, to waitressing, to being a pedicab operator in a hilly city…  With all of it, there is a copious amount of drinking!  She talks about dating, being an introvert, learning to accept yourself, and a host of other topics that women everywhere deal with, although perhaps not with as many f-bombs or vagina references.

The book has points where I was laughing in the car, and other sections where I was fighting back tears on my drive to work.  You might not appreciate her style, but she definitely has something to say.