Never Call Me a Hero: A Legendary American Dive-Bomber Pilot Remembers the Battle of Midway, by N. Jack “Dusty” Kleiss, and Timothy and Laura Orr

What can you say about this man, other than the fact that he is, indeed, a hero? Born Norman Kleiss, he went by Jack, until a mistake on a Hawaiian airfield earned him the nickname Dusty for the rest of his time in the service. 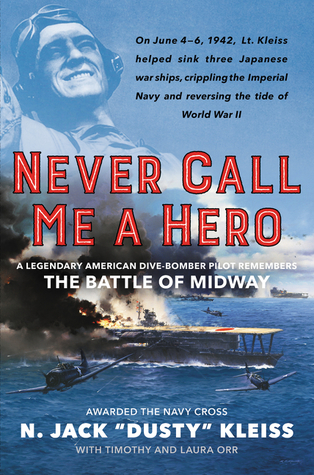 Jack Kleiss wanted to be an aviator early on and set his goal toward getting into the US Naval Academy. He then had the opportunity to attend flight school, where he was trained as a fighter pilot. The United States declaration of war after Pearl Harbor led to his being stationed on a naval aircraft carrier.

Kleiss’ most significant combat operation in the war was as a participant in the Battle of Midway, a battle between the US and Japanese naval forces. Three US and four Japanese aircraft carriers were involved, as well as numerous heavy and light cruisers and destroyers on both fleets. The US was still reeling from the attack on Pearl Harbor but was able to strike a decisive blow to the Japanese fleet. In all the Japanese lost all four of their aircraft carriers and a heavy cruiser, with another heavy cruiser sustaining damage. Over 3,000 Japanese sailors and aircrew lost their lives.

Kleiss’ book is written with the humble style so common among World War II veterans, the characteristic, “I was just doing my job,” deflections when someone points out the significance of the sacrifice he made for our country. He says a number of times that his fallen comrades are the real heroes, the men who were shot down as they bombed their targets, or worse, ran out of gas on their flight back to their carrier, because they were sent out knowing there wouldn’t be enough fuel for the return trip. And those men are truly heroes, but that doesn’t make Jack less so.

This poignant memoir relates his tale of the Battle of Midway, but also his long marriage to his wife Jean and his family, which he considers his real accomplishment. His simple style is relatable and easy to read, and he is honest enough to share his failings, as well as his frustrations with his superiors and colleagues. Jack had a long career in the Navy, training pilots after Midway, then moving into the private sector for a period before retirement.

Jack Kleiss lived to be 100 years old, another memorable accomplishment, but sadly died shortly before this memoir was published. We can’t tell him now, but he really was a hero.