Mammoth Cave National Park is located in central Kentucky.  It is named for its huge size; it is the largest cave system known in the world, at over 400 miles of explored passageways.  Cave exploration continues today, and new passages are found and mapped each year, so it really is anyone’s guess who large the cave system really is.  The whole area has many caves, so it is likely that some of these other caves are really just part of this one giant cave system!  The park was created on July 1, 1941 by President Franklin Delano Roosevelt, but the cave at that point had close to 150 years of exploration and commercial exploitation by then.

Mammoth Cave was first discovered by white settlers in 1797; the owners of the land discovered this and several other caves nearby.  It has been known to Native Americans for thousands of years; they were known to enter the cave to extract the gypsum deposits here.  Native Americans also buried some of their dead in the cave, the cool, dry conditions of certain areas in the cave were perfect for mummification; several Native American mummies were discovered in the cave during the 18th and 19th centuries, as well as the mummified remains of a man who was crushed by a boulder while mining in the cave.

Mammoth Cave first became a commercial venture during the War of 1812, when British supplies of saltpeter were unavailable; saltpeter is a component in the manufacture of gunpowder – pretty important when we were at war with the British!  Slaves were brought in to mine the saltpeter deposits, but after the war, the demand dried up.  Enterprising owners decided to try their hand at the tourist trade and Mammoth Cave was opened up to tours by the 1830s.  Slaves guided many of the tours, and even after the Civil War, African American guides played an important role in the tourism industry and the exploration of the cave.

In the early 1900s, interest began mounting for the creation of a National Park; however, like many of the parks in the East, the land here was already long settled with thriving communities.  The process of buying these settlers out of their land and seizing other parcels through eminent domain created lots of bitter feelings that lasted years after the park’s creation.  As a result, Mammoth Cave still has the remnants of these communities, including old churches and cemeteries.

The cave system is a limestone cave, with many different features; parts of the cave are very dry – so dry in fact that one of the commercial ventures that was attempted in the 1800s was a tuberculosis sanitarium (it was short lived).  Other sections are wet areas, and the Green River even runs through a portion of the cave.  The cave is home to several species of bats (which are struggling with white nose syndrome, a fungal infection), eyeless fish, and a cave specific species of eyeless shrimp.  I know you are wondering, and no, there have been no woolly mammoths discovered in mammoth cave; it really is named for its giant size.  Caves are so interesting!

Mammoth Cave has several types of tours, from the Historic tour where you can see the original entrance to the cave and see the old evidence of saltpeter mining, to lantern tours and caving tours.  There is also camping and hiking on the surface as well! 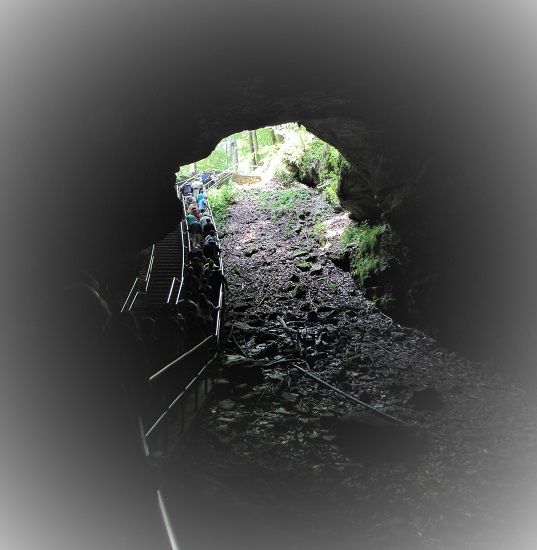 Despite its easily accessible location, Mammoth Cave only receives about a half million visitors each year (approximately 533,000 in 2018).  I’m not sure why, but it was busy the day that I was there.  I will tell you about my visit in an upcoming post!