After I left the Indiana Military Museum, I had one more stop I wanted to make in Indiana.  I was headed to the Lincoln Boyhood National Memorial. 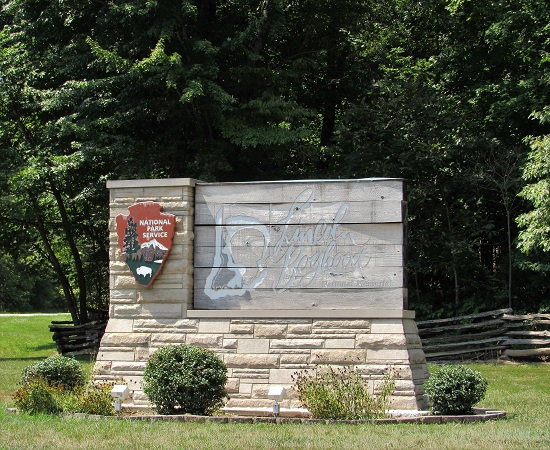 The site was home to Abraham Lincoln and his family for 14 years, from 1816 – 1830.  Lincoln was only 7 when Thomas Lincoln moved the family to Indiana, after losing his previous homestead due to bad surveying and challenges to land titles.

Unfortunately for the Lincoln family, white snake root plant grew widely in the area; cows ate the plant and their milk and meat became contaminated and poisonous to humans.  Lincoln’s mother, Nancy Hanks Lincoln, ended up dying of the milk sickness in 1818, when Lincoln was 9 years old.

Lincoln’s older sister Sarah became Lincoln’s caregiver, until Thomas Lincoln remarried another Sarah, Sarah Bush Johnston, who nurtured Lincoln’s children as if they were her own.  The blended family and one of Lincoln’s cousins all lived in the one room cabin together.

Lincoln lived in the settlement until he was 21; in 1830 Thomas Lincoln moved the family to Central Illinois.  The homestead faded into obscurity until interest was renewed in 1879.  Nancy Hanks Lincoln’s grave was discovered, as well as the graves of several others who had died over the years at the settlement.

In the 1920s, funds were raised to do an archaeological study to learn more about life in the community during the time Lincoln lived there.  The site became Lincoln State Park in 1932 and ownership of the land was transferred to the National Park Service to create the National Memorial in 1962.  The living farm on site was created in 1968.

The cabin where Lincoln lived with his family is long gone, but flagstones and a reconstructed hearth mark the outline of where the cabin was. 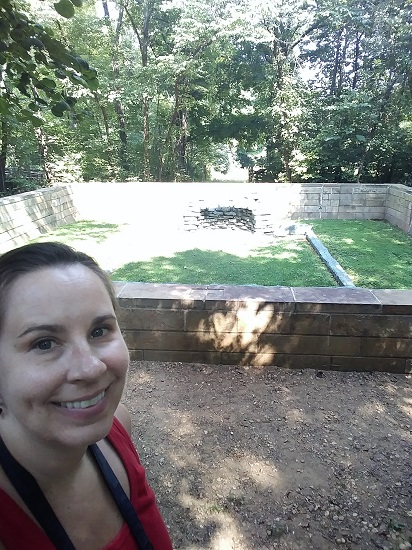 Me with the foundation of the original cabin

Reconstructed barns and cabins provide visitors a sense of what life was like on the frontier during Lincoln’s time there.  Historical interpreters are there to answer questions and describe what they are doing during their days.

Exterior of the Lincoln Boyhood cabin

A recreation of the Lincoln Boyhood cabin 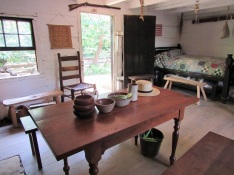 Interior of the Lincoln Boyhood cabin

The workshop at Lincoln’s Boyhood cabin

A wagon at the Lincoln Boyhood cabin

There is also a trail where you can see various stones from important times in Lincoln’s life.  There is a stone from the store Lincoln owned in New Salem, Illinois, as well as a stone from the boarding house where Lincoln was taken after he was shot at Ford’s Theatre in Washington, D.C.  There are twelve stones in all, with explanations of where they came from.

A stone from the Berry-Lincoln store

It was interesting to see what life would have been like for Lincoln as a child and young adult.  The site has been planted with new trees that better represent what the land would have looked like 200 yeas ago, and about 150,000 people visit annually.   I enjoyed checking it out, and talking to the interpreters.  It was so profound to be able to walk where Lincoln had walked as a child and young man!