We started our Independence Day with a visit to see the Changing of the Guard at Buckingham Palace.  We got out of the hotel room at 9:15 so we could get there by 10 am to get a good spot.  The show starts at 10:45 and our 10 am arrival did get us a spot right at the fence.

The Changing of the Guard, which is officially called the Guard Mounting, originated in the late 17th century as a way to drill military troops and increase unit cohesion.  In case you were wondering, the guards are fully operational soldiers.

The show…  Wow!  What can I say?  This was something that Taryn really wanted to see and that I wasn’t too sure about, but it’s kind of a thing you have to do when you are in London, right?!

There is a lot of pomp and circumstance at the Guard Mounting.  The guards and the bands march in from down the street; the day we were there it was the British Beefeaters (the Queen’s Guard) and the Canadians (the gray uniforms).  It surprised me that it wasn’t all red-uniformed, Queen’s Guard soldiers.  I took a few videos; please forgive my lack of any sort of good video skill!

Then once they are inside the gates, they do a battle of the bands type of thing, which I was not expecting at all.  I was surprised by the music that they played.  They played the Incredibles theme song, and Bon Jovi’s Livin’ on a Prayer, in addition to some more traditional music.  How’s that for making a tradition contemporary?!  It was fascinating to watch and the bands are very talented.

After the battle of the bands, they formally do the changing of the Guard, where the British Beefeaters took over the guard from the Canadians.  There is a lot of fancy marching around, adjusting their rifles and swinging their arms all fancy, military like.  There are flags and salutes and turns on the heel.  It was interesting, and something I would probably never be talented enough to pull off. 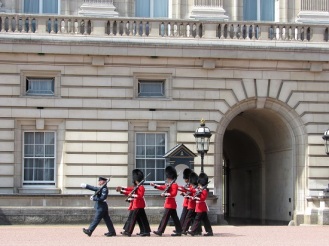 All in all, I thoroughly enjoyed watching the Changing of the Guard and Taryn was in heaven!  I wasn’t sure at first, but it was certainly a must-see in London.  It would be interesting to see it from a different vantage point too!

The show ends about noon, but we still had a lot to see that day!