After departing from the City Cruises boat, we made our way up to the Tower of London.  This is another one of those iconic can’t-miss London experiences.

The Tower of London was originally founded in 1066 as a part of the Norman Conquest of England.  The oldest structure on the site, the White Tower, was built beginning in 1078 by William the Conqueror, and it has been in continuous use since then!  The site was added on to several times over the years and has served as a royal residence, a prison and has housed the royal menagerie, the treasury and the Royal Mint.

Despite its reputation as a prison, torture chamber and execution ground, only 7 people were executed here until the 20th century.  Most executions were actually carried out at Tower Hill, which was north of the Tower of London.  During World Wars I and II, 12 men were executed here for espionage, surpassing the total number of executions during the medieval period.

A tower at the Tower of London

Me and Taryn with the Tower Bridge in the background

In the 11th and 12th centuries, the tower was expanded to its current size, with two concentric walls built around the White Tower.  There was construction to further fortify the castle with moats and ditches too.  The Tower of London site is large, encompassing 12 acres.

We spent several hours wandering around; checking out the numerous exhibits in various areas of the castle.  There was a very interesting exhibit on the Royal Mint, explaining how money is made and counterfeited, as well as historical attempts to crack down on the counterfeit problem.  The King and Queen’s quarters are open to the public, so you can check out how royalty lived in the medieval period.  I do have to say, I’m glad to live in the modern era – I like flush toilets, being warm and showers a bit too much to have been very happy back then. 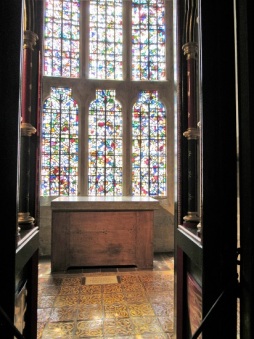 A throne in the King’s quarters

From 1235 until the 1800s, the Tower of London housed the royal menagerie, essentially London’s first zoo.  There were lions, a polar bear, an African elephant, and in later years, pumas, eagles, tigers and a jackal were added.  Of course, there was very little real knowledge about the care and feeding of the menagerie’s animals, and the keepers fed elephants a diet of meat because they assumed they were carnivores.  Perhaps even more bizarre, one elephant arrived with instructions from the Spanish King to only feed it wine between September and April.  Sadly the elephants didn’t live long, as I am sure you can imagine why.  Visitors could see the animals, although it was not for the faint for heart.  In later years of the menagerie the animals sometimes injured or killed their keepers, and even visitors!  It’s not a good idea to pet the lions…

There is an exhibit in the White Tower on armor, which was cool!  They had so many suits of armor for horses!  They also had suits of armor that would fit gigantic men, and young children.

The White Tower – built beginning in 1078 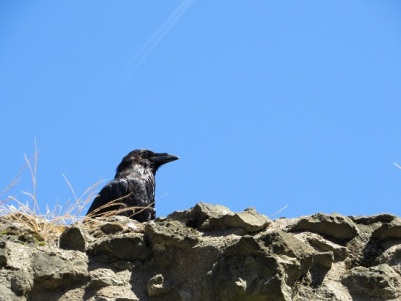 A domesticated raven at the Tower of London

Even though the Tower of London didn’t have many executions, there was an exhibit in the Salt Tower documenting the stories of some of the prisoners that were kept there over the years.  And an exhibit of some medieval torture methods, including the rack.

Graffiti from one of the tower’s prisoners. 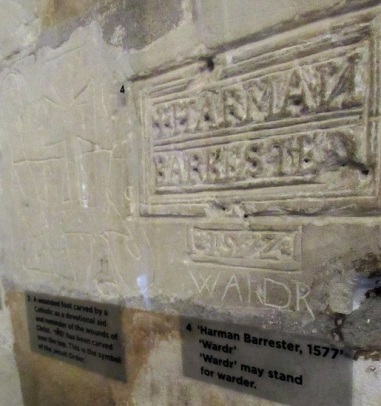 Finally, no visit would be complete without checking out the Crown Jewels!  The line was long, but it moved quickly, and the jewels were incredible!  Room after room of staffs, jewelry, table settings and of course crowns.  No photos were permitted inside this exhibit, but the jewels were very pretty!  They even had two moving sidewalks that took visitors past the crowns – to prevent people from bottle necking at the crowns.  Taryn and I went back and got back on the other sidewalk to get a better view of the jewels on the other side.  What can I say – I like shiny things…

While we were at the Tower of London, we had lunch at the New Armouries Cafe, one of their onsite food options.  I had the fish and chips, which came with peas.  A little malt vinegar and I was happy!  The cafe is cafeteria style, but they do a pretty good job with the food.  Taryn and I also had some sorbet while we were waiting in line to see the Crown Jewels!  Delicious!

The Tower of London was well worth the visit, with so much to see!  We weren’t anywhere close to being done for the day; our visit to the Tower Bridge is coming up next!