My friend Paula texted me in early February, from the Oregon Coast.  She had had a hard week, as had I.  We talked about life and love and disappointments and new beginnings.  We talked about meeting for a girl’s weekend on President’s Day weekend.  At the time, I was on the computer, so I looked up the National Park Inn at Mount Rainier.  They had one room left – so I asked Paula if she wanted to go snowshoeing!  It was meant to be!!!

As I am sure you guessed, she of course said yes, so a few weekends later, we were making our way to the Inn for the long weekend.  We met outside the park at a friend’s house so we only had to take my car (hers is not suitable for snow).  Driving in, we were both in awe of the scenery, as the wooded lowlands give way to snow.  She had never been to Rainier, and made jokes about how I was taking her to a remote location so I could murder her where the body would never be found…  I have the best, more morbid friends!

When we got up to the Inn, we were able to check in early.  It was raining, and I figured Paula would never want to snowshoe again if I took her out for the first time in that wet slog, so we joined a Ranger tour on the history of Mount Rainier National Park.  It was supposed to be a ranger guided snowshoe but they decided not to go out in the pouring rain either.  Our ranger gave a wonderful talk!

After the talk Paula and I did what any self-respecting young women on a relaxing vacation at a mountain lodge would do.  We got all bundled up for the cold, and filled up wine glasses, and found a couple of chairs on the front porch to hang out, drinking and people watching.  We stayed outside several hours, and yeah, we got tipsy. 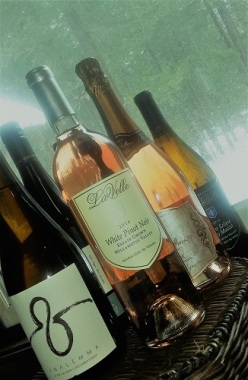 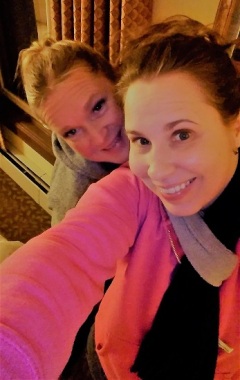 I was so excited I could do a high ponytail! 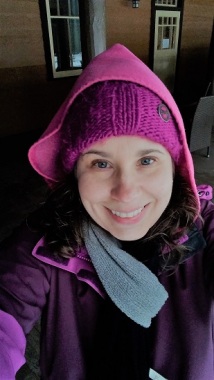 Bundled up for porch sitting

Eventually the rain gave way to snow, and we loved watching a trio of guys in their thirties going all out posing in the snow.  They were hilarious!  They were taking off their jackets to pose in just their t-shirts, flexing their muscles, putting their sunglasses on and taking them off.  I swear we thought we were going to see them do the duck lips! 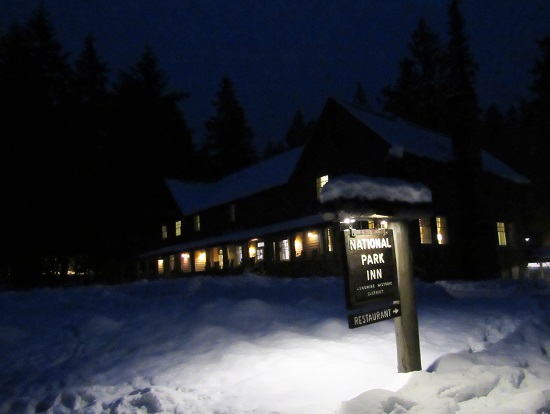 The Inn at night

Once it got dark we went inside to the restaurant for dinner – it was amazing – and then went into the game room and played backgammon and worked on a puzzle.  We had such a good time!  Even though our plan was to snowshoe that day, we still had such a great day! 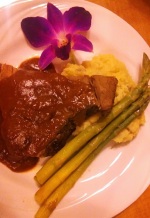 Meatloaf at the National Park Inn 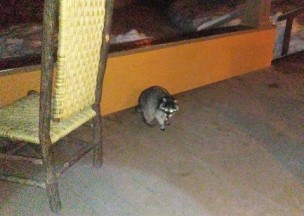 I liked him. Paula did not.