Day 3, Friday, May 12, 2017
Friday was a big day!  I woke up at 6, got up and had coffee on and sat on the lanai for a while as breakfast was cooking.  But we couldn’t dawdle too long because we had a big day!
Our first destination was the summit of Mauna Kea.  You can drive to the top!  The Visitor’s Center on the mountain is at about 9,200 feet.  By the time we got up there, it was getting pretty cold, so I took the opportunity to change into pants and we checked out the exhibits at the Visitor’s Center.  There was scientific data about the mountain and its observatories, as well as information on the traditional origin story of Mauna Kea.

Me at the Visitor’s Center

Poliʻahu is one of the four goddesses of snow in Hawaiian tradition; and an enemy of Pele, goddess of the volcano. She resides on Mauna Kea and is Hawaii’s most beautiful goddess.  Poliʻahu mingled with mortals on the east slope of Mauna Kea and was hōlua sledding with them one day when a beautiful stranger challenged her. The stranger had no sled, so she borrowed one to run against Poliʻahu.  In the first run, Poliʻahu won, and then she exchanged sleds with the stranger to be gracious, and won again. On the third run, the stranger opened lava streams in front of Poliʻahu to try to win the race, revealing herself as the goddess Pele.  Once she recovered from Pele’s attack, Poliʻahu threw snow at the lava and froze it, confining it to the island’s Southern end.  Pele is said to rule Kīlauea and Mauna Loa on the southern end of the island, but Poliʻahu controls the northern end of the island.

Mauna Kea, when measured from the surface of the Earth (on the floor of the ocean) is 33,000 feet tall and is actually the tallest mountain on Earth!  But when you measure from sea level, the summit of Mauna Kea is at 13,796 feet, because most of the mountain is below the surface of the ocean.  The road getting up there is a rocky gravel road and 4WD is required.  I think a lot of the rental car companies don’t allow tourists to go up there in the rentals, but we had the Rodeo – there are perks to driving in an old beater SUV!  The road really is rough though people – it is definitely a bumpy trip to the top, so if you plan to go, be careful! 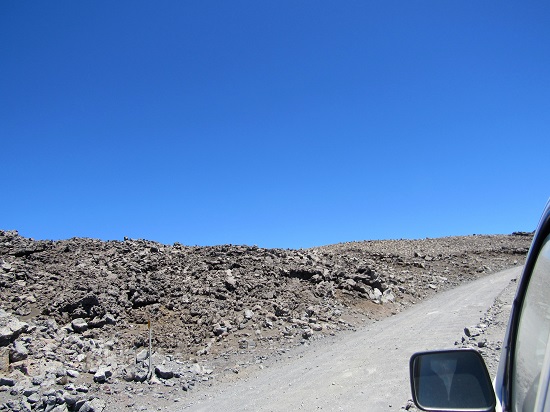 The gravel road to the summit

The summit is interesting – a barren, rocky landscape with patches of snow!  It is interesting to think that there is snow on Hawaii, even in late spring.  The summit of Mauna Kea has an observatory with telescopes for stargazing and scientific research – it is a scientific facility and not a tourist attraction so we didn’t go inside.  There is a stargazing program with telescopes at the Visitor’s Center though for people who are interested!  We wandered around at the summit for a bit and took photos, but there really isn’t a whole lot to see or do there, besides say you have been, unless you plan on hiking. 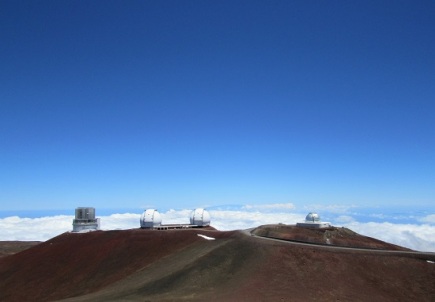 The scientific observatories – and snow! 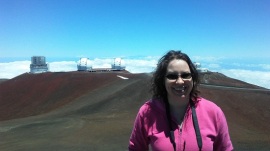 Me at the summit

Me and Mauna Kea – more snow! 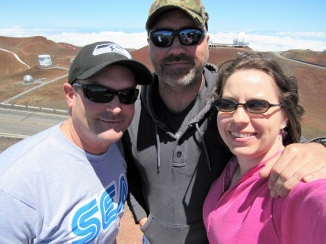 Me and my friends!

Cinder Cones on Mauna Kea
Given my experience with altitude sickness on Pike’s Peak, I wasn’t that interested in staying at the summit too long.  Plus we had other places to see!  But now I can say I have stood at the summit of the tallest mountain on Earth!  Take that, you Everest mountaineers!