Do you have any idea how long I have been trying to get a decent photo of Bighorn Sheep?  I was thwarted in Colorado at Colorado National Monument, got the faintest glimpse of them at dusk on the drive to Great Sand Dunes National Park, got blurry pics of them at Pikes Peak, and then missed them again at Joshua Tree…

But Badlands National Park did not disappoint!  We saw Rocky Mountain Bighorn sheep for the first time that day at the Burns Basin Overlook.  There were three of them.  Two were resting on the rocks, and one was walking unhurriedly.  My mom didn’t get out of the car at first, so I had to go back and drag her out to make sure she got to see them too.  Of course, I did make sure to get some photos first.  I was so excited! 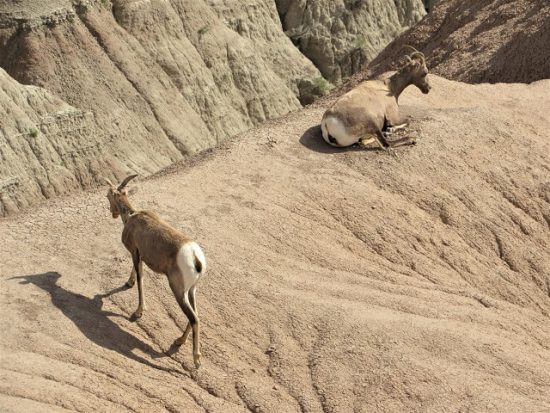 I spotted some pretty little songbirds, but couldn’t really tell what kind they were because they were silhouetted against the blue sky.

They might be Mountain Bluebirds, but I couldn’t tell for sure…

We decided to drive down the Sage Creek Rim Road, a gravel road that is supposed to be where the bison and the bighorn sheep often hang out.  There is also a prairie dog town a few miles down the road.  We didn’t see any bison that day, but we were not disappointed because we had already done some fabulous spotting at Theodore Roosevelt National Park, and Yellowstone National Park was still coming up later in the trip!  Soon we happened upon a huge herd of animals grazing in the field in the distance.  At first glance, we both thought they were deer, but after watching them for a few minutes, I figured out that they were bighorn sheep!  We took some photos and continued on, because they were pretty far away.

Soon we came upon a bunch of sheep hanging out right by the road, and often, in the road!  There were a lot of babies too!  I had so much fun just watching them and taking photos.  They were stunning and so close!  They weren’t bothered by us at all. 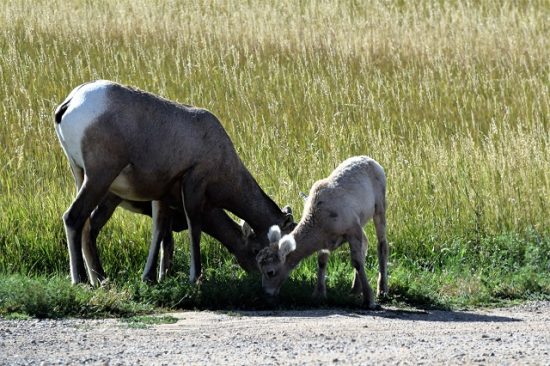 Not even this guy, who was too lazy to even stand up all the way to re-position himself for better grass!

This guy… I have no words…

It was tough to pull away from the bighorns, but we headed the rest of the way to the prairie dog town.  These prairie dogs didn’t want to pose as nicely for us though…  I did get a nice shot of a Western Meadowlark though!

Prairie Dog! He was on a mission…

We did so much wildlife spotting that it was starting to get late, and we wanted to grab some dinner.  We returned the way we came, stopping for some more photos of the bighorn sheep, before heading out of the park.  Just outside, we found a lone pronghorn posing beautifully, so I got some photos of him too!

Is this not the cutest trio of butts ever!

A stately Pronghorn, just outside of the park

It was a great day for wildlife!