After our busy morning in Deadwood, our next stop was the Broken Boot Gold Mine; it was named for the old, falling apart boot that was found in the mine as the current owners were getting it ready for tours.  For $12 ($5 for the tour and $7 to pan for gold), we took a tour of a now defunct gold mine.  Our guide was a chipper high school student, working through the summer for his family’s business.  He was upbeat and fun, and although he mostly stuck to his script, he explained the inner workings of the gold mine.  This particular gold mine didn’t make that much money, but it was an interesting tour.  He showed us the equipment that the miners used, and explained that they had to purchase it themselves.  We also got to experience the pitch black of absolute darkness in the mine, as well as the VERY dim light of the candle that the miners worked with.  The conditions would have been difficult.

The entrance of the Broken Boot Mine

The inside of the Broken Boot Gold Mine

At the end, if you chose to add it onto your tour, you got to try your hand at panning for gold.  Of course, they seed the dirt and rocks with some gold, so it was a “miracle” that both my mom and I found some!  Our guide was great about showing us the technique, although I think my mom did much better at it than I did (she has done this before).  We both had a lot of fun with it though!

Mom panning for gold. She makes it look effortless…

Me? Not so effortless…

After the Broken Boot mine tour, we checked out the Days of ’76 Museum.  That’s 1876 in case you were wondering.  The entire focus of the museum is to celebrate 1876, the year that Deadwood was first established after the gold rush began, as well as the Days of ’76 festival, an annual celebration.  The Days of ’76 has a rodeo, a parade, and lots of people in costume.  The celebration began in 1924, so it has over 90 years of history!  The museum has exhibits with photos and historic saddles and costumes from the festival and rodeo.  They even have a whole floor of historic carriages from days gone by, as well as other forms of transportation, including a horse drawn hearse and a beer wagon.  Strangely, there was no wine wagon…  Who wouldn’t want to have a wine wagon?!  But they did have an exhibit showing a historic saloon. 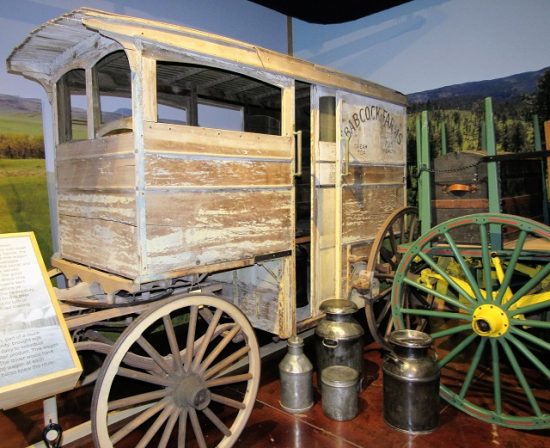 Me in the Stagecoach at the Days of ’76 Museum.

We had gone to the Visitor’s Center to get some information at the beginning of the day and they had a passport card where you could get stamps at various places (the bus tour, the Adams Museum, The Days of ’76 Museum, the Broken Boot Mine, the Trolley, etc.).  We ended up being one stamp short for the day to get the prize, but the woman took pity on us.  I think she was secretly impressed that we managed to make the most of our day…  Either that, or she just didn’t care…  But either way it worked out well for us because, we each got to  redeem our passports and we both chose the historic photo playing cards…  Yes, in case you are wondering, I am a complete and total nerd.  So?

There’s gold in them thar hills!

We left Deadwood and made our way to our home for the next three nights; the Mystic Valley Inn in Custer, South Dakota.  Along the way we got caught in a huge rainstorm which sent bikers trying to find places to shelter along the side of the highway.  They looked pretty miserable standing out there in the rain; it made me pretty happy for our wonderful, yet dented to hell, car.  The rain had cleared along the way though, and when we got to our motel, it had stopped.  We got checked in to the cute 40’s/50’s roadside motel with a nice arbor and outside seating area, and then ventured out again to find dinner…

The Buglin’ Bull Bar and Grill in Custer, South Dakota looked intriguing, so we got a table and ordered our meals.  I had the beer sampler (The Wapiti Wheat, the 1874 Black Hills Gold (an Amber), the Armstrong Ale (an ESB), and the Custer Nut Brown Ale) – they were all good, but less complex than the Washington beers I have gotten used to.  For dinner I had the Pheasant Flatbread with kalamata olives, peperoncinis, feta cheese and tomato.  The pheasant tasted like chicken, but more oily and gamey.  It was delicious!

My beer sampler at the Buglin’ Bull 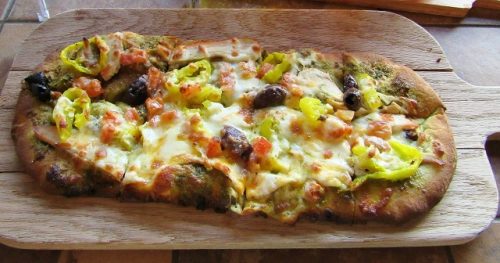 Pheasant Flatbread at the Buglin’ Bull

We ended the evening relaxing in our room, watching a bit of TV, journaling and reading.  The perfect end to a great day!