I have been itching to visit Theodore Roosevelt National Park for awhile; ever since I found out about the park’s history and all the wildlife that live within its borders.  And I was almost there!

We woke up in Glendive, Montana, with the park as the destination on our agenda for the day.  We got on our way and stopped at the grocery store to get a picnic lunch, and then the drive to Theodore Roosevelt National Park took about an hour.  The awesome thing about the highways out there is that they are wide open, so we made great time!

We didn’t check out Medora, North Dakota while we were there, but it looked like a fun little tourist town with lots to do for families.  The town has an Old West theme, and lots of entertainment for all ages.  It seemed like a great place to hang out for a few days on a vacation in the area.

The West Entrance to the South Unit of Theodore Roosevelt National Park in Medora, North Dakota. And me!

Once we got into the park, we stopped in at the Visitor’s Center – we got our stamps and postcards, and we watched the park’s movie.  I love watching the park movies.  We also saw Roosevelt’s Maltese Cross Cabin, which has been moved to its current location right behind the Visitor’s Center.  Theodore Roosevelt spent $14,000 to establish his cattle ranch in North Dakota in 1883 and the cabin was built during that winter.  He came back out after his wife and mother both died on Valentine’s Day, 1884 and spent time recovering from the loss.

We listened to the Ranger Talk about Roosevelt and his time in North Dakota – the cattle ranch was basically a disaster.  The winter of 1886-1887 was a devastating one and most of the cattle starved to death when they couldn’t get to the grass beneath the snow.  Roosevelt wasn’t there at the time though, having already returned East.  Although Roosevelt didn’t last long in North Dakota, his legacy remains.  The cabin is open for people to poke around in, and there are a couple of pieces of furniture that are believed to have belonged to Roosevelt -his rocking chair and his trunk.

I found a couple of hikes I wanted to do at the park – although I decided not to do anything too long or strenuous because of time restraints, and the fact that the temperature was in the high 80s that day.  My hikes were an opportunity to see some of my first Badlands views of the trip!  Rather than hiking, Mom opted to stay at the car and do some journaling and sketching while I went off.

The first hike that I did was the Ridgeline Trail – a 0.6 mile (roundtrip) hike that offered great views of the badlands along the ridge.  At this point, as the badlands is just beginning, they are much greener and lush than they are further east.  There was a marked difference in the views here and the badlands that were visible further east when we went to Badlands National Park later in the trip.  The views were gorgeous and it was well worth the climb.  It was very windy here, so my selfies were a bit challenging! 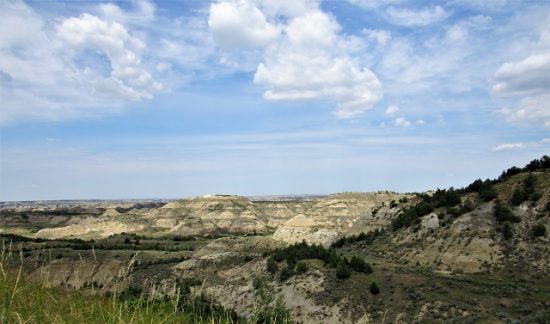 The view of the badlands from the Ridgeline Trail

Me with the badlands in the background – Ridgeline Trail 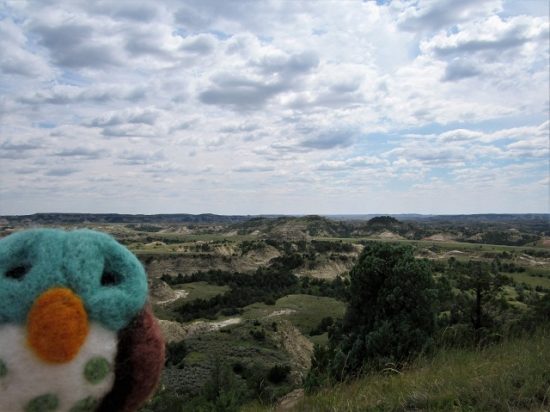 Piddles posing with the badlands

The second hike that I did was to the Buck Hill Viewpoint – it is a 0.2 mile (round trip) climb to the highest point in the park. The view was amazing – there were similarities to the Ridgeline Trail, yet there were subtle differences too.  I could have looked at that view for awhile… 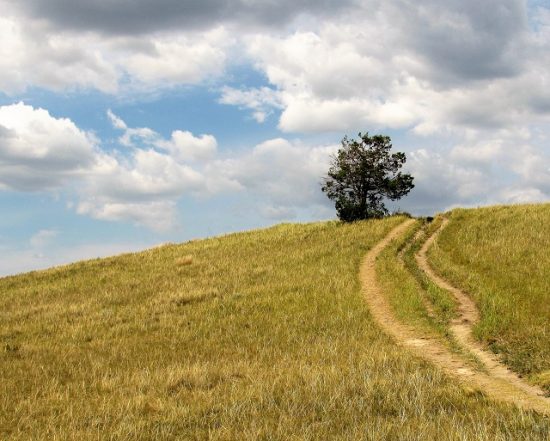 A lone tree at the Buck Hill viewpoint

The last hike that I did was the Wind Canyon Trail.  It is a 0.4 mile (round trip) out and back hike with wonderful views of the Little Missouri River, and its oxbow bend (where the river bends in a U shape).  This viewpoint is well known for its fabulous sunsets; I would have liked to have checked out the sunset from there, but since it was the middle of summer, we needed to be on our way before the sun was due to set.  The views of the river and of a large herd of bison grazing in the distance were both spectacular!  I even found a kind man to take my photo at the viewpoint.

The Little Missouri River, from the Wind Canyon Trail. There is a large herd of bison in the far upper left corner of the photo.

Me at the Wind Canyon viewpoint, overlooking the Little Missouri River

We saw a lot of wildlife while we were in the park too, but I am saving the wildlife for my next post though!