The Yucca brevifolia makes its home within the unique habitat of the Mojave Desert in Joshua Tree National Park.  More commonly known as a Joshua Tree, this yucca was named by Mormon pioneers who believed that these succulents looked like the biblical figure of Joshua raising his arms to heaven in prayer. 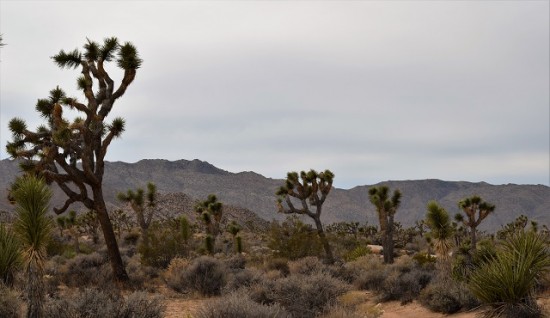 Joshua Tree National Park protects two primary desert habitats, the cooler higher elevation Mohave Desert, located between 2,000 and 5,000 feet in elevation, and the hotter Colorado Desert (part of the larger Sonoran Desert) at the lower elevations.  The Mojave Desert is known for its Joshua Trees, while the Colorado Desert has cholla and ocotillo.

Joshua Tree also has several spectacular rock formations, which are monzogranite, created when groundwater seeped into cracks in the monzogranite and eroded the corners away to form the round rocks.  Then when flash floods eroded away the ground around the rocks, these large rounded boulders were left exposed.  The exposed piles of rocks are called inselbergs.  Joshua Tree became a mecca for winter rock climbing, when places like Yosemite were covered in snow.  However, it eventually became a destination in its own right.

Joshua Tree was designated as a National Monument in 1936, after Minerva Hoyt’s activism on behalf of preserving desert habitats achieved protection for the park.  Although she was originally born on a plantation in Mississippi, she moved as a young woman to Pasadena, California and became interested in desert plants through gardening.  Mrs. Hoyt was also instrumental in obtaining protection for Death Valley and the Anza-Borrego Desert.  The park was elevated to National Park status on October 31, 1994, after passage of the Desert Protection Act; at the same time 234,000 acres were added to the park for a total size of 790,636 acres (1,235.37 square miles).

In addition to rock-climbing, the park is popular for hiking, birding – hundreds of bird species travel through the park on their spring and fall migrations, and astronomy.  The park’s dark skies, along with Southern California’s relatively stable atmosphere, makes for excellent conditions for observing the stars.  The park has nine campgrounds for visitors, and annual visitation is 1,383,340.

The sun sets over Joshua Trees…

Park wildlife includes many species of birds, lizards, snakes, rabbits, ground squirrels, coyotes and Bighorn Sheep.  Many of the animals within the park are nocturnal, due to the high daytime temperatures.  Native Americans inhabited the area beginning about 400 years ago, but were gone by the early 1900s.  Prospectors began moving into the area in the 1840s, looking for gold and silver.  Over time, about 300 mines were established within the current boundaries of the park – most didn’t produce much, but a few were quite profitable.  There are still several areas within the park where visitors can see the remnants of the old mines.

I was lucky enough to visit Joshua Tree for a long weekend in December, and I had a wonderful time.  My posts will be coming soon!