Have you ever felt that your family history is the stuff of novels? Perhaps Aunt Gertrude was that one-of-a-kind woman who fought in the French Resistance? Maybe your Grandfather Jacob was a CIA spy during the Cold War in Cuba? Or maybe your family was just made up of hard working people who did what they had to do to survive, caught up in the laws and social norms of an era. They survived and loved in the ways that they knew how, warts and all. 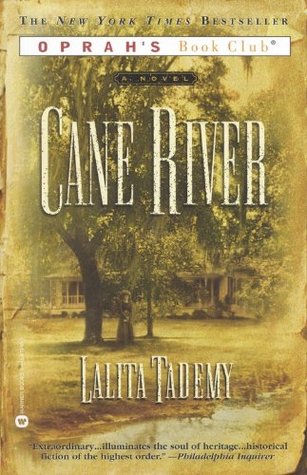 Lalita Tademy’s family was more like that – the ordinary kind of family.  Although living for generations in bondage made the family’s achievements more extraordinary. The story begins with her Great-great-great Grandmother, a slave sold from Virginia to the Louisiana bayou, a place called Cane River, where the culture was predominantly French Creole. She fell in love, raised a family, and lived, all while owned by another. Generations of strong women, with all different personalities, doing what they could to fight for some semblance of control and authority in a culture that gave them none.

The novel is fiction, but based on the genealogical record of her family. Tademy researched for about two years, piecing together the births, deaths and marriages of a family over 150 years ago. Her work was challenging, as records were not as thorough for slaves, if they existed at all. And the gaps, the information that could not be gleaned from court and church records, and deeds of sale, were filled in with Tademy’s imagination, weaving a rich story of the women that preceded her.

Tademy doesn’t gloss over her slave ancestry; instead she confronts head on the complexity of a system that created relationships that mirrored marriage in every way but name, yet often didn’t allow a couple to live together, or even keep their own children. She also fills the tale with rape, social customs, racism, and subservience that existed in the slave-holding south. She explains how her family members inherited progressively whiter skin as white men fathered children. She explained how some family members chose to move away – where they could “pass.” How education and enrichment provided a better life; how rare those chances were in a society built upon slavery and filled with racism.

The result is a wonderfully written narrative, with characters that explode off the pages of the book; their emotions, their defiance, their intelligence and their desire to work for a better life all evident in the descriptions of their personalities and lives. I was intrigued until the very last page.

One thought on “Book Review: Cane River by Lalita Tademy”

I love my morning walks to the waterfront! Yesterday was a glorious day! #waterfront #morningwalk #PNW #girlfriends #weekendvibes
When you are tryin' to act casual while beggin' for breakfast service... #Caturday #catsofinstagram #cats #weekendvibes
You know it is fall when the puzzles come out. Beer caps from mostly beers I've never heard of! #beercaps #puzzles #fall
Photo ball practice on the Cle Elum river. It was nice to spend some time relaxing... #PhotoOfTheDay #photography #vacation #PNW #Washington #summer
Did some playing with the photo ball at the cemetery today. So pretty! #Roslyn #cemetery #PhotoOfTheDay #photography #vacation #PNW #Washington
Just a bit of day off, back roads exploring... #easternwashington #vacation #CleElum #girlstrip
Saw this young lady as I was leaving for work the other morning... #Deer #wildlife #PNW #morning
Oysters, fish tacos and cider, oh my! Enjoying all the good holiday weekend grub! #girlsday #SundayFunday #HolidayWeekend #LaborDay2021 #summer #PNW
Fun evening cider tasting with the girls! So many good ones! #cider #craftcider #girlsnight #SaturdayNight
I love our gorgeous sunsets! Amazing evenings with good friends and this view! #beautiful #sunset #PNW #Friends #bookclub #Reading