At the end of May Jon and I had the good fortune of going on a weekend camping trip with my family on the Oregon Coast. It was my parents, my brother and sister in law, and my two nieces and nephew. What a fun time!

Jon and I started our drive down in the early afternoon on Friday – he had to work until 1 pm. The traffic was absolutely terrible! What should be a two hour drive turned into four hours and 15 minutes along the notoriously crappy Puget Sound I-5 corridor – YUCK! That meant that we rolled in late for a beer at the Fort George Brewing Company in Astoria, Oregon. 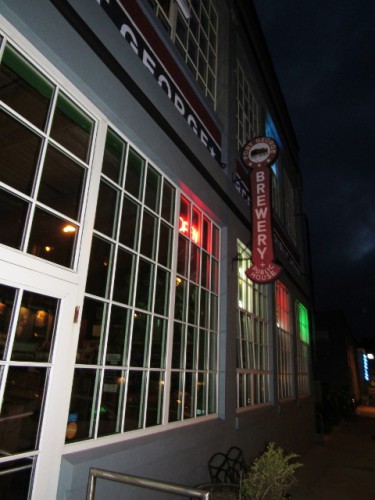 The rows of windows at the Fort George Brewery!

The Fort George Brewing Company is located at the original fort site in Astoria, from when it was founded in 1811.  For years, it served as the primary fur trading post in the Northwest for the Pacific Fur Company.  Obviously, the current building wasn’t there then; the current building was built in 1924 and was originally a service station.  I love when companies re-purpose old buildings and preserve the history!

Jon ate dinner at the brewery, but I had succumbed to hunger hours before and had a fast food dinner on the road. I still had dessert though – in the form of two Willapa Bay oyster shooters – Delicious! I had the Divinity – a Belgian style wheat beer made with berries – and Jon had two; the 3-Way IPA and the Cavatica Stout.

We both enjoyed our beers very much, but we couldn’t linger too long as we still had over an hour of driving in the dark, before we finally reached the campground.

Thankfully, my Dad had set up our tent for us, so all we had to do was arrange our sleeping pads and bags, brush our teeth, and snuggle into bed. Where I promptly froze half to death all night, while watching Jon sleep peacefully next to me. That man can sleep through anything!

The cold night reaffirmed why I’m not a “camper,” because of course, being cold and not sleeping just meant that I lay there thinking about how I needed to go to the bathroom, and then I had to get out of the sleeping bag, get out of the tent, put shoes on, find a flashlight, walk to the bathroom, and go back and repeat the whole process in reverse. Can anybody else relate?  How does this beat a hotel?

But enough about my love of camping…

After a very early morning, vegging out like a zombie with a mug of hot coffee for a while, the morning was spent beach combing with the kids.  We found and picked up a million broken sand dollars and mussel shells, and saw a bunch of these little jelly blobs that looked like the bottom of a soda bottle. Like they had been molded. I still don’t know what they were. My nephew took a face plant in the water and decided that digging in the sand above the waterline was a much more fun option. I can’t blame him – it was a pretty cold morning!

The beach at Nehalem Bay, on a cool, cloudy morning

The strangest molded jellyfish! Anybody know what this is? There were dozens of them.

Shortly before lunch, Jon and I headed out to explore some of the Oregon coast sights. 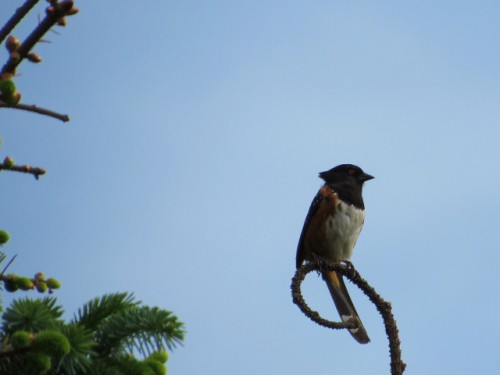 We started out with two Netarts oyster shooters each, and we both had elk burgers for lunch at Pelican Brewery – mine was topped with feta – YUM! I had the beer sampler, with six of their regular selections, and my choice of a seventh beer.  I chose the “Meet the Flockers” wheat beer.

Beer Sampler – so many choices!

I enjoyed all of them, but my favorites were the Scottish Style Ale and the Brown Ale. Jon enjoyed the Imperial IPA. We sat out on the patio, where the weather had warmed from the morning, and I just let the heat sink into my cold, tired bones (don’t I sound like I’m 80!).

My Elk Burger at Pelican Brewery – simple and delicious!

All in all, a great morning of relaxing.  But we weren’t done for the day!