I finally got the opportunity to stay inside a National Park!  And I didn’t even have to camp!  We stayed at the National Park Inn, which has a long and storied history. James Longmire (for whom the Longmire Historic District is named) was one of the first white settlers to visit the region and establish a business presence.

Longmire homesteaded in Ashford, the closest town outside the park, and began building roads and trails into the area. He transported tourists to the park via a wagon road to bathe in the Longmire District’s mineral waters. Over the next several years, he built a small hotel and expanded the trails in the area up toward Paradise. 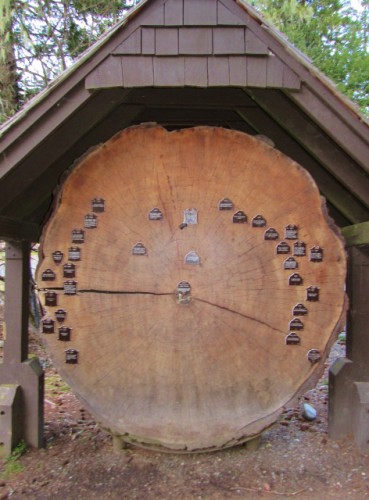 A cedar stump showing what was happening at specific points in history. This tree was alive when Lewis and Clark visited the Pacific Northwest.

In 1906, the Tacoma and Eastern Railroad built the original National Park Inn, across the street from Longmire’s 30 rooms of assorted tents, cabins and hotel rooms. Longmire had died by this time, but his family was operating the business, and were irritated by this, and it soured Longmire’s relationship with the park’s administration. In 1916, the family leased their property to the Longmire Springs Hotel Company, who built another hotel and additional cabins.

A few years later in 1919, park administration achieved a long time goal of having only one concessionaire, and a deal was reached that transferred all the buildings to the Rainier National Park Company, who operated the 1906 National Park Inn. The 1916 hotel building was moved across the street and became the National Park Inn Annex – this building contained 17 guest rooms. The 1890 hotel, and all the tents and cabins that the Longmires had built were demolished, to improve the appearance of the area. 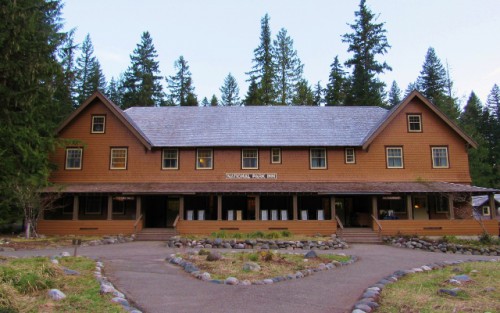 Other historic structures in the Longmire District include:

The Administration Building and Visitor’s Center at Longmire

We checked in and made a reservation for dinner about 30 minutes later – enough time to change our clothes and refresh a bit. The restaurant in the Inn can be described as fine dining in a casual atmosphere; we were dressed in jeans and hiking shoes and didn’t feel out of place – perfect for a National Park! 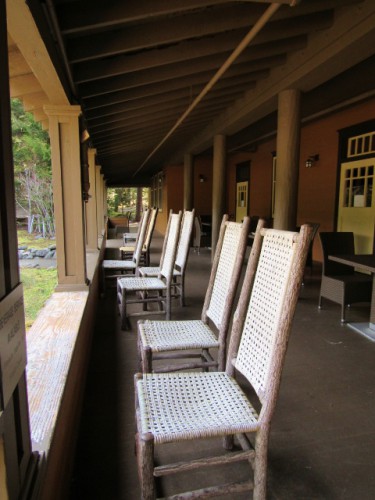 The Porch at the National Park Inn

Jon ordered the Rainbow Trout with a Deschutes IPA. I had the Pork Loin with tea to hydrate. Both of our meals were delicious and the service was excellent; the only disappointment was the price of Jon’s beer. $7.75 for a 12 oz. bottle! That’s sports stadium pricing! I decided to wait for my wine until we went back to the room; we had brought a bottle with us.

Our room was simple, neat and clean but small, and the bathroom harkened back to yesteryear. There are no TVs at the National Park Inn, no cell service, no phones in the room and no Wi-Fi. Forced interaction! Jon and I went with the flow and played National Parks Monopoly until we got too tired and declared a draw. What a fantastic day!

The fireplace in the game room at the National Park Inn

The next morning, we woke up and went down to breakfast – our hotel stay included a voucher for their made-to-order breakfast – it was delicious! I had the Country Breakfast with eggs over medium, bacon and a homemade biscuit with tea, and Jon had the Veggie Omelet with an English muffin and coffee. Then we showered, packed our things, checked out and got out for a hike! 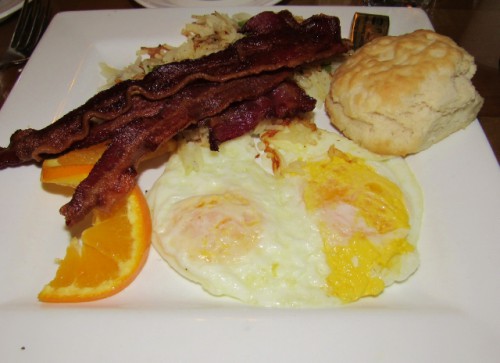 My country breakfast at the National Park Inn