When you don’t have family, who can you turn to? The family that you choose – friends. China Dolls, by Lisa See, is a book about friendship. Not just any friendship – three friends from seemingly different backgrounds. Helen, Grace and Ruby – three Asian women coming of age just before World War II. But that’s where the similarities end. 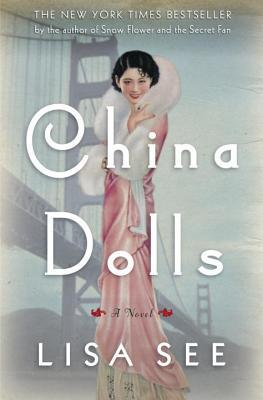 Grace grew up in small town middle America, the only Asian girl in her town. She learned to sing and dance and fit in with the culture and customs of her white neighbors. Trouble with her father caused her to run away to San Francisco to start a new life.

Helen was born in San Francisco’s Chinatown, the only daughter in a family that prized her seven brothers. She lives in the family compound, a constant reminder of the family’s bad luck, torn between her loyalty to her family’s traditional culture and the modern big city life that is all around her.

Ruby grew up in Hawaii, and moved to San Francisco to launch her show biz career. She is loud, brash, and forward, shocking the other two girls with her tendency to flaunt her body. She is hiding a secret though, that would eventually change her life forever.

The three meet by chance and get jobs at a new Chinatown nightclub, dancing in a show that is risqué for its time. As the three bond, they learn each other’s hopes, dreams, fears and secrets, and learn that each one of them is not quite who she seemed. They go through life’s joys and disappointments, often together and sometimes apart.

The book is well written, switching between the three character’s stories effortlessly, providing each woman’s unique perspective, formed by the life she has led. The book explores some deep subject matter: friendship, womanhood, love, domestic violence, promiscuity, homosexuality, war, and the complexity of traditional Chinese culture. Within each of these contexts, the novel explores a woman’s experience, and it does it in a way that is often raw and heart-wrenching.

At times the women are quite drama-queeny – but I appreciated that it captures the essence of these three friends as complex, flawed beings. Each of them succumbs to the temptation of self-interest at times – only able to see and consider her own needs. At other times, each woman is incredibly generous, putting her own desires aside to help her friends.

The secrets come out throughout the novel, while following these women through the war and beyond. Some secrets you are expecting; some are so deeply hidden that you feel just as shocked as the other friends when the truth is revealed. And when it is, you finally feel that you understand the motivation. Times change, people change, but the friendship remains.

I enjoyed China Dolls; it was an interesting trip back in time.