Glen Haven was founded in 1857 with the name Sleeping Bearville, then became a company town in 1865 when a sawmill was established there.  The town’s main source of industry was to provide cut wood for the steamships plying the lake, as well as food. 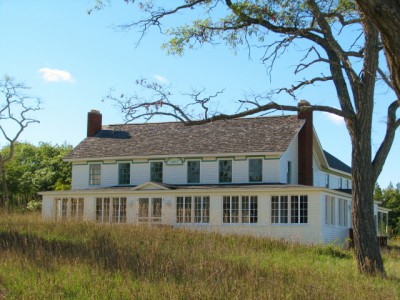 The Sleeping Bear Inn – Built around 1865

Later, a cannery was opened there; the location right on the lake meant it was perfect for hauling the catch right up to the dock, offloading, and canning. Over the years, the timber declined and the shipping industry slowed.

They also didn’t anticipate all the sand, and the fact that the sand blew everywhere, and shifted… Over time, the sand shifted and the dunes gradually began taking over the town. After battling the sand for years, many of the residents finally just gave up and moved away.

We also wandered over to the Sleeping Bear Point Life Saving Station.  It was constructed in 1901, to provide further protection for the sailors on the lake.  Being a sailor was a dangerous occupation – during the harsh winter of 1870-1871, 214 sailors lost their lives on the great lakes alone.  Over the years, technological advancements lessened the need for large numbers of lifesaving stations, and Sleeping Bear Point closed its doors during World War II.

The life saving station was closed when we visited (during early to mid-October it is open, but only on the weekends), but we were able to check out the outside of the house where the life savers lived, as well as the boathouse, tucked securely out of harm’s way from the water, with two sets of tracks to slide the boats down to be launched.

There wasn’t a whole lot to see given everything was shut up tight until spring, we were a little surprised to find people wading in the water. It had warmed up quite a bit since the morning, but I wouldn’t say it was swimming weather. But I guess there are hardier souls than I, as evidenced by the large numbers of polar bear swims each year.

But after touring around, what I hadn’t found was the Visitor’s Center. The GPS had told us that we passed it, but I hadn’t seen it, and I thought maybe it would be down at the water. There was one in Glen Haven, but it was closed, and it didn’t seem large enough to be the main one. Plus the radio channel (don’t you love it when parks have their own radio channel!?) said it was open until 5. I convinced Jon to backtrack before the Dune Climb, because it would be after 5 when we finished hiking, so I could get my stamp. He grudgingly agreed.

“The Most Beautiful Place in America”

We found it off the main road about 50 feet on a little side road, and I was able to get a map, my stamp and a book on Michigan lighthouses. And postcards… because no visit to a Visitor’s Center is complete without postcards… And then off we went to the Dune Climb!