Crater Lake National Park was the fifth National Park to be named, on May 22, 1902, by Congress and Theodore Roosevelt.  Although it was one of the earliest parks, that was thanks to the perseverance of William Gladstone Steel, who had been lobbying Congress to create the park since 1870!

Steel first learned about Crater Lake in1870 and was immediately enthralled, but it took another 15 years before he had the chance to visit.  He participated in many of the scientific experiments in the 1880s that established Crater Lake as the deepest in the U.S., and documented its exceptional clarity.  Steel also was integral to the building on Crater Lake Lodge, which was completed in 1915, and the Rim Drive, which is a 33 mile drive around the entire rim of the lake, which was completed in 1918.

Of course, the Native Americans in the area, belonging to the Klamath tribe, have known about Crater Lake for thousands of years.  In fact, their oral tradition includes stories of the eruption that blew the top off of Mount Mazama 7,700 years ago, and created Crater Lake in the caldera that was formed.  According to their tradition, two Chiefs, Llao, of the Below World, and Skell, of the Above World fought each other in a battle. 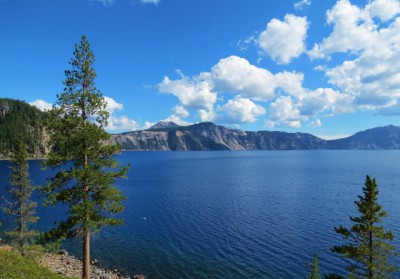 Llao had visited the top of Mount Mazama, and on one visit, had seen Loha, the daughter of a Klamath Chief.  When she rejected him because he was ugly (aren’t these stories always about unrequited love?) Llao rained fire onto the Klamath people.  They appealed to Skell for help, and that’s when the trouble really got going.

After a fierce battle, Skell defeated Llao and drove him back into the underworld, and covered the hole with the top of Mount Mazama, and then to ensure he wouldn’t get out again, covered it with a dark pit of water that still exists today.

Gold prospectors “discovered” the lake while out searching for gold in 1853.  However, they didn’t find any gold there, so the find wasn’t all that momentous.  But eventually, Crater Lake attracted enough attention that the media wrote about it, and William Gladstone Steel began his quest to get Crater Lake designated as a National Park.

I have written about Crater Lake before; it is the one place (at least so far) where I have felt so overcome by a sense of peace and tranquility even when surrounded by people.  It just has that effect on me.  There are many peaceful places, but peace within a crowd of people is scarce.  Surprisingly, Crater Lake isn’t a hugely visited park; annual attendance in 2012 was 447,251.  I have such a hard time understanding why more people don’t want to go!

Part of this low attendance is because of the fact that snow covers the area for a full eight months of the year; the park is open all year but has limited accessibility outside of the June to early October summer window.  Only about 100,000 people visit outside of the summer season.  You have to be pretty determined to visit in the winter; the record year for snow came in 1950, with 903 inches of snow!

And the tranquility I felt when gazing at the lake?  I think that’s in part due to the sapphire blue color of the lake itself.  The stunning blue is caused by its depth, and the fact that the water is so clear.

Crater Lake from the Boat Tour

A secchi disk (an 8″ black and white disk that is dropped to measure clarity) was still visible at 139 feet below the surface of the lake!  The water is so clear because there are no rivers or streams pouring sediment into the lake.  The only water coming in is rain and snow melt.  And the porous volcanic soil allows the snow melt to run down into the lake without taking much sediment with it.

I was so excited that we got to visit again, and this time, we were going to take the boat tour around the lake!

Have you been to Crater Lake?  Did you do the boat tour?