You want to know one of the best things about Oregon Wine Country?  The signage!  Well, that, and the wineries!  Oregon has some of the easiest wine country to navigate, thanks to hundreds of little blue roadsigns pointing you to the wineries.  Even if you didn’t have a map, or a GPS, or a guidebook, you could find some wine!

On our way back from a satisfying day trip to Oregon Caves National Monument, we saw a few of those winery signs and decided to make an impromptu stop at Foris Vineyards.  Of the four of us, Jon was the only one who had heard of Foris – but his dad doesn’t really pay attention to wineries or wine so really, only three of us count on this score.  But Jon had heard good things, so drove a few miles down the country road, following the signs and ended up at a little tasting room in the front section of a wine production facility.

Foris Vineyards is family owned and operated by the Gerber family, and has been since 1971.  That’s when Ted Gerber and his wife purchased the property; they planted the first vines in 1974.  For awhile they sold their grapes to other wineries, but in 1986 they began using their grapes to make their own wine.  Currently about 80% of the grapes they use are estate grown. 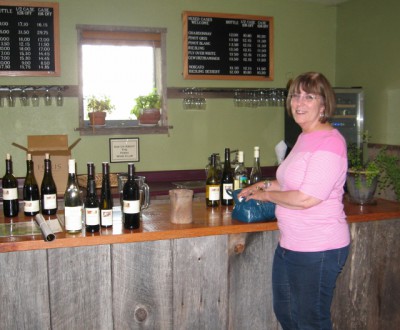 My fabulous mother in law at the Foris Tasting Room

We were guided through the lineup, and I found myself really enjoying the reds.  We were able to do a side by side tasting of their two Pinot Noirs; one their flagship Pinot and the other the single vineyard Pinot from the Maple Ranch vineyard.  Both were delicious!  Their Cabernet Sauvigon and Cab Franc were also very good.

My mother in law really enjoyed the Fly Over Red blend and their sweet Moscato.  The Fly Over wines show that this wine-making family has a great sense of humor; these wines are named for the fact that because the Illinois Valley of Oregon is one of the most remote wine growing regions in the nation, many members of the national wine press will never come out to witness these wines being made.  So the folks at Foris simply wave at the planes overhead, because you never know who is “flying over”.

A few of the wine awards Foris has received

Jon came in and out of the tasting room to sample my wine at his leisure, and then settled with his father on the Adirondack chairs outside.  Linda and I took our time enjoying the wines and chatting with the server.  Soon enough, we were on our way back to our home away from home by the river, to swim in the pool, eat dinner and wile away a relaxing evening, with a newly opened bottle of wine.

One thought on “An Impromptu Stop: Foris Vineyards”