After we left Petrified Forest National Park, we got back on the road to our next destination.  We were staying in Williams, Arizona that night but we stopped for dinner in Flagstaff along the way.  We didn’t get much of a glimpse of Flagstaff, but what we did see made us both want to visit again sometime in the future.

Our choice for dinner that evening was the Beaver Street Brewery (in keeping with Jon’s brewery cravings for the trip).  When we got out of the car, we were immediately frozen to the core by the frigid wind!  I was surprised by the huge drop in temperature from earlier in the day, only a few hours away.  We hurried into the restaurant, and were met with a lively atmosphere, but we were seated right away.

We started with an appetizer of Steamed Mussels in Thai Curry Sauce, served with slices of baguette.  It was a fantastic dish!  The mussels were juicy and the curry sauce was delicious, with just the right amount of spice.  It was a very pleasant surprise, because I’m not usually a big fan of curry spice.  Another thing that I liked was that the sauce was thick enough that you felt that you could really get a portion onto the pieces of bread that came along with dish.

For dinner, I ordered the Enchanted Forest pizza.  It had brie, artichokes, olive pesto, red peppers and pine nuts.  It seemed like an odd combination of ingredients, but I decided to give it a try.  It was fantastic!  It was certainly one of the most creative pizzas I have ever had.  There were so many flavors coming together, but it really worked!  I let Jon have a little bit, but I have to admit, I pretty much stuffed myself on this pizza. I paired it with a raspberry ale, called the Bramble Berry Brew, which was delicious and light bodied. 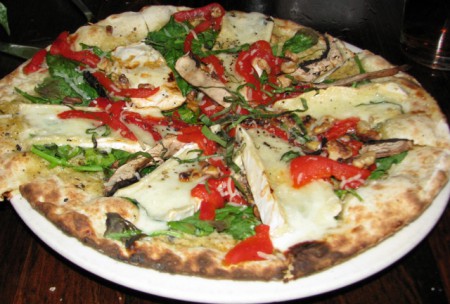 My Enchanted Forest pizza – so creative!

Jon had the Green Goddess Salmon salad.  It was a big piece of grilled salmon on a bed of mixed greens, zucchini, cherry tomatoes, and a chiffonade of fresh basil.  It was drizzled with a balsamic vinaigrette.  The salad was so huge that it was heaped on the plate, almost falling off the sides.  Jon really liked his meal too, so we were three for three on great dishes!  Jon had two beers; the Lumberyard IPA and the R&R Oatmeal Stout. He liked both, but liked the IPA better.  He said they were some of his favorite beers from the whole trip.

If we lived in the area, I’m sure this would be a place we would come back to.

After dinner, we got back on the road for the last 30 minutes of driving to Williams, AZ. Williams is located about 50 minutes directly south of the Grand Canyon, with an easy straight drive up to the park. It also has several reasonably priced hotels. We could have stayed somewhere closer, but the prices go up and the availability goes down as you get closer to the park.  Our plan was to stay there for 2 nights, and spend the entire day in between at the Grand Canyon!

We watched carefully for elk, because we were driving at dusk, but we didn’t have any problems (we did see an elk right by the side of the road though!).  We got the car unloaded in record time because it was still so cold and windy, and checked into the Quality Inn.  Luckily, it didn’t take long to get settled into our cozy room and warmed up.

Of course, we made it an early night, because we wanted to get an early start on the Grand Canyon!  I couldn’t believe we were finally going to see it!

Have you been to Flagstaff, Arizona or the Beaver Street Brewery?  What did you think?

2 thoughts on “SW National Parks Trip: On the Road…”