After Chetro Ketl, I made my way back to the car to warm-up a little, and Jon and I drove over to Casa Rinconada.  Casa Rinconada is a village site at Chaco Culture National Historical Park, in contrast to the Great Houses that were constructed during the same time period.  It was a village where daily living would have taken place, and is a much more simple style of construction, one story, and without the formal open plaza that the Great Houses have.  Case Rinconada was excavated between 1936 and 1947, and after the excavation, many sites were covered over again to protect them from the elements and looters.

Walking around the trail, we were struck by the fact that everyplace you look there are mounds of earth that cover Chacoan construction.  During the height of its existence, this was the “downtown core” of Chaco Canyon.  Casa Rinconada’s homes are often built over other construction as well, including earlier pit houses.  The Puebloans seemed to love to remodel and reuse.  Some rooms were used for living, while others were primarily storage rooms that contained excess foods or materials. 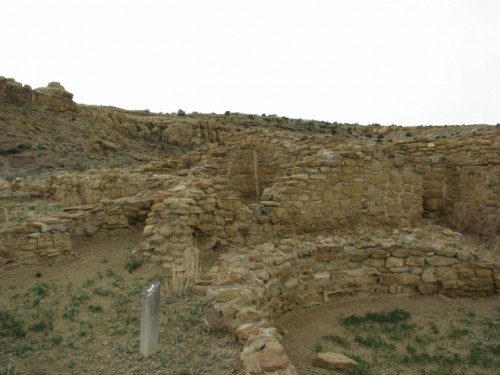 Casa Rinconada contains one of the largest kivas in the Puebloan world.  It has T-shaped doorways that would have allowed for entrance into the kiva, instead of the only entryway being through the hole in the roof.  The kiva also contains several built-in notches in the walls; they don’t know why but suspect that some of them are astronomical markers.  The village also contains a keyhole shaped kiva, which is unusual. 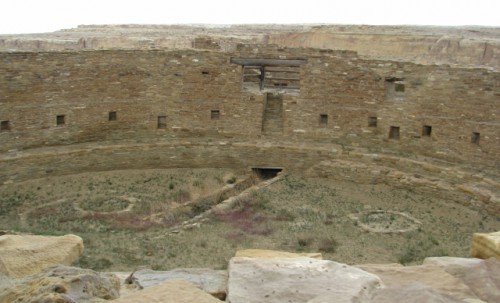 The excavations at Casa Rinconada revealed about 130 burials; these people were buried simply on twilled mats and without many grave artifacts.  Some had clay vessels, potsherds and shell bracelets, but they were not as elaborate as the burials at Pueblo Bonito, where burials were accompanied by large quantities of worked shell, turquoise pendants and musical instruments.  This gives researchers some insights into the social structure of the people who lived in Chaco Canyon.

There is so much about this culture that we will never know, but it was fascinating to spend some time wandering around the sites and artifacts that they left behind and trying to get a glimpse into what life was like here.  I hope I will get an opportunity to return, perhaps when the weather is a little warmer and I can hike to some of the outlying sites.  And if you get a chance to visit, I hope you will take it!

And with that, we got back on the long bumpy road and slowly made our way to the highway.  Next stop – Santa Fe!