In my last post, I explained just how brutal the road to Chaco Culture is…  But once you are there, the sites are very accessible.  Chaco Culture has six major sites on a nine mile stretch of road through the park. You can park at the parking area for each site and then it is a short walk out to the ruin. A few of the sites have trails between them, if you want to make it a longer hike. The trails are hard packed dirt with fine gravel and some paved sections; it was pretty easy hiking overall.

We decided on the sites we wanted to visit, and figured we could see more if we still had time when we finished. We decided on Hungo Pavi, Chetro Ketl, and Pueblo Bonito, the largest Great House in the complex. We also wanted to visit Casa Rinconada, which was more a residential site, rather than a ceremonial complex. I was excited to see them all!

Our first stop was Hungo Pavi. Hungo Pavi was named when the site was rediscovered; according to some, it stands for Reed Spring Village, but others say that the meaning of the name is not known.  It was built between 943 and 1047, and once may have been up to four stories tall, containing 73 rooms.  Hungo Pavi is unexcavated, so you can see the site as it was when it was rediscovered, after sand and vegetation have covered over the structure. 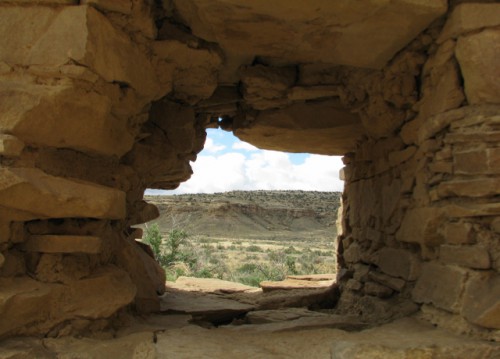 View of the Canyon through a window at Hungo Pavi

The next site that we visited was Pueblo Bonito; the largest Great House in Chaco Canyon, and a significant building in the Puebloan community of sites.  It contained more than 650 rooms; with some estimates as high as 800 rooms.  The Great House contained sections as many as 5 stories tall.  Pueblo Bonito was constructed in stages over 300 years – from approximately 850 A.D. to almost 1150 A.D.; its period of construction and occupancy was longer than any other site in Chaco Canyon.  There is evidence that Pueblo Bonito was occupied into the early 1200s. 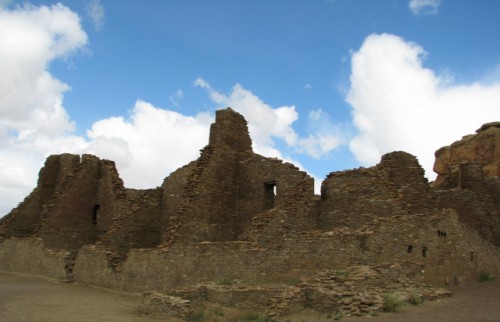 We wandered around Pueblo Bonito for awhile, checking out all of the different rooms and kivas.  Pueblo Bonito has several interesting features, including T-shaped doorways similar to the ones seen at Mesa Verde, and a back wall that contains several rooms with doorways that open to the outside of the complex, rather than having doorways into the rest of the complex.  Sadly, looters before the turn of the last century used explosives to blow holes in the back wall so they wouldn’t have to dig through hundreds of years of accumulated sand and debris.  It allowed them to easily reach and steal priceless artifacts, but destroyed many rooms and compromised the structural integrity of the back wall.

Another 30 rooms were destroyed on January 22, 1941, when an enormous block of sandstone collapsed from the cliff above.  It was 97 feet high, 140 feet long and 34 feet thick – it weighed about 30,000 tons.  It is still at the site, giant boulders that sit where they fell that day; an overlook gives a better view of the huge stones and the damage that they caused.  Interestingly, the same rock threatened Pueblo Bonito when the Puebloan people lived here – they knew of the danger that it posed.  They placed prayer sticks in the crevice and built a supporting masonry terrace at the base of the rock. 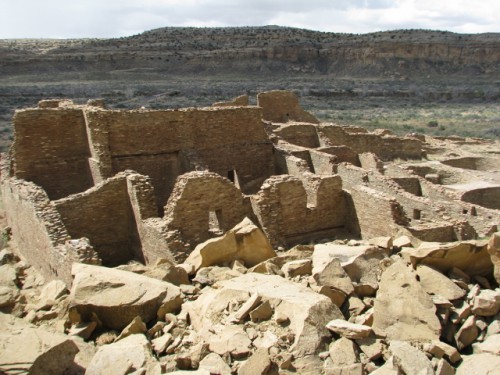 We also saw one room that still contained its original plaster walls and roof!  It is pretty amazing to think about the fact that this roof survived intact through hundreds of years in the harsh conditions of the desert.  The roof contains timbers that were transported 40-60 miles from the closest forests.  The trees were cut, peeled and allowed to dry for months or years to reduce their weight.  Then the ends were cut and sanded with stone tools.  Some of the best estimates about the age of the structures in Chaco Canyon are due to the fact that the timbers can be dated with dendrochronology – tree ring dating. 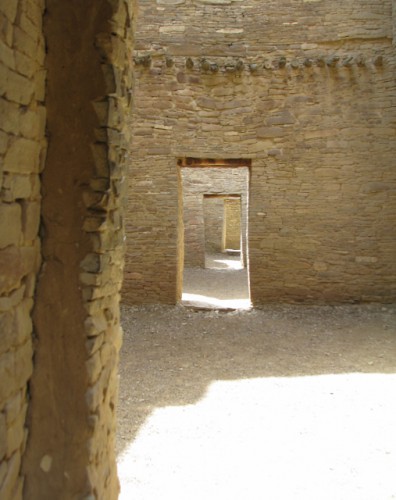 A series of rooms at Pueblo Bonito

It was really cold that day, with a biting wind, so Jon decided to head back to the car while I continued checking out the Pueblo Bonito site.  I was tempted by a sign that pointed out a trail leading to the cemetery, so I walked the quarter mile trail to see what was there.  As it turns out, it was the gravesite of Richard Wetherill, who was murdered here in Chaco Canyon in 1910.  Wetherill is the same guy who explored the Mesa Verde cliff dwellings.  There are a few other people buried there; the last burial that I saw was in 1981.  I was a bit surprised by that, because Chaco Culture has been a part of the National Park System since 1907. 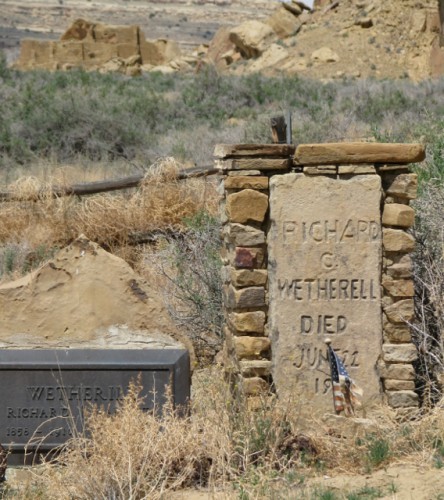 Everything about Chaco Culture was amazing – I’ll post about the other sites we visited next!