Our day at Arches National Park had arrived!  Jon went for a run in the morning and I slept in a little bit because we had been up so long the night before on the Astronomy Tour.  We had breakfast in the super-packed Super 8 breakfast area, checked out and got to the park at about 9:30.

Now of course you know I went to the Visitor’s Center and got my National Parks Passport Stamp, and some postcards!  The Visitor’s Center is the lowest point in the park, sitting at an elevation of just over 4,000 feet.  We also looked at the exhibit explaining all the sedimentary layers that you see in the park.  There was also some great information on desert wildlife that I could have spent more time at, but Jon was getting impatient.

So we drove up into the park, where we promptly began passing the first of 12,527 bicyclists on the road.  I’m only exaggerating slightly… The Moab area is famous for its mountain biking, but I wasn’t expecting all these road bikes.  Now I’m all for sharing the road, but some of these cyclists were really annoying – riding two or three wide at 5 mph on the narrow road, so there was no way to get around them… Grrr…  I digress.

We decided to hike the Delicate Arch trail first; it was the longest hike we were planning that day, and also the one I thought would be the most interesting.  There is a parking lot at the trail head, but as it was a busy day, it was full and we had to park off the road a little ways away.

At the very beginning, right off the trail head is the Wolfe Ranch, which consists of a turn of the last century cabin and corrals.  John Wesley Wolfe was a disabled Civil War veteran who moved to the area with his son Fred in 1888.  He believed that the drier climate of the southwest would be good for his lingering leg injuries.  By 1898, they had built a cabin and were farming and raising a small number of cattle near the Salt Wash nearby. The remaining cabin is actually the second cabin built by John Wolfe, which was built in 1906. 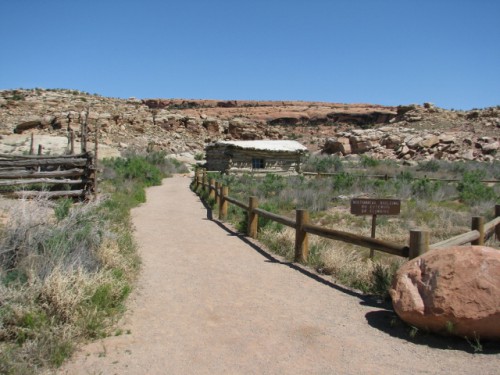 Wolfe Ranch – At the Delicate Arch Trail Head. To the left is the original corral fencing.

As the story goes, John’s daughter Flora Stanley moved to the site with her family, and she was so appalled at the primitive condition of the first cabin that she asked her father to build a new one. The original cabin washed away in a flood, but the 1906 cabin still stands and is listed on the National Register of Historic Places. They have the door open so you can peek inside through a metal grate, and boy is it small…  But apparently it was much nicer than the first one, because after all, it does have a wood floor.  Oh my, how times have changed!

John Wolfe and his family were aware that Delicate Arch was just a few miles away; it is known that they walked to Delicate Arch to view the sunset sometimes.  John Wolfe and his family didn’t stay at the homestead for long after the second cabin was built; his daughter and her family moved into Moab in 1908.  And Wolfe sold the ranch in 1910 and moved back to Ohio, where he died in 1913.

The Front Door of the Wolfe Ranch Cabin

It’s pretty neat that the National Park Service preserved this cabin for visitors to experience.  Hopefully it will be around for years to come.  I’ll be posting about our hike to Delicate Arch next!

Have you visited the Wolfe Ranch at Arches National Park?