Saturday evening Jon and I hosted our first Wine Century Club party.  I got the idea after deciding that I wanted to become a Wine Century Club member, and a party seemed like a good way to try some grapes I hadn’t tried before.  If you are not familiar with the Wine Century Club, it is an online “club,” open to those who have tried wines with at least 100 of the grapes used in wine-making.  You can read more about it here.

After a preliminary tally – I had 59 grapes on my list of bragging rights.  After doing a bit of digging though I added another three that I had tried without knowing it; Xarel-Lo, Macabeo, and Parellada, which are the grape components of the Spanish sparkling wine, Cava.  That meant that going into the party, I was at 62 grapes.

I made up a list of all the wines that I hadn’t tried before, and made visits to several local wine shops and wrote down every wine I could find that contained one of these grapes.  Each couple was to bring one wine that contained one of these unusual grapes (although some of my lovely guests really got into it and brought one bottle per person!).  That made for quite the assortment of wines.

The wines that arrived (in no particular order), with the grape name in bold and italics:

That’s 15 grapes that I hadn’t tried!  We had a great time tasting through the lineup.  Since almost nobody had tried any of these wines before (I think one person had tried one of the wines), we just set them out, whites first then reds.  We really had no idea how they should be ordered.  For just purchasing blindly, I was pretty impressed with all of the wines; there weren’t any that were bad, but as with any wine tasting there were some that I liked more than others.

My favorites of the evening were the Young Vines Xinomavro, the Tikves Vranec, and the Damilano Arneis.  The Xinomavro and the Vranec were both nice, fruit forward reds with light tannins.  The Arneis was a dry white with a light hint of butter and a floral finish.

We had a great time describing the Zweigelt as a “quickie,” because you got a brief burst of flavor on the palate before it quickly dissipated, leaving almost no finish.  That said, the Zweigelt was my friend Allysa’s favorite wine of the evening, because it didn’t have the heavy tannins that so many of the reds had.  It was a nice easy drinking wine.  We were teasing her about her tasting notes reading, “dry, very dry, too dry, dry…” but hey, she knows what she likes and it isn’t a dry red!

I wasn’t a big fan of the Terra di Vulcano and the Palazzo della Torre – they were both big, heavy tannic reds (of the “dry, very dry” variety).  Coincidentally, they were both Italian reds; I have tried several other Italian red varietals and haven’t found them to be so tannic (Dolcetto, Barbera, Nebbiolo being a few).  I found that very interesting. I guess there really is something for everyone there!

We didn’t even try to do a food theme to go with all these wines, so we just had an eclectic buffet of cheeses, crackers, salami and prosciutto, Spanish and Greek olives, cowboy caviar, stuffed crust pizza, carrot sticks, chocolate, and apple pie.

As with any good party evening, I completely forgot to take any photos – but I did take a photo of the wines that were still here after everybody went home (I was a bit more successful in getting people to take wine with them this time!).  And now I am at 77 grapes – 23 to go! 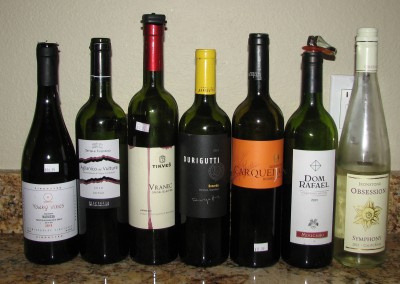 I think a good time was had by all.  If you host your own Wine Century Party, be sure to let me know how it goes!  Happy Sunday Everybody!