This week was Martini’s off week in her chemo regimen.  She gets her chemo drugs every other week, and on the off-weeks she goes to see Dr. Kim and get her chemo blood-work and her weigh-in.  Unfortunately, she lost weight again – and is now back down to 6.5 pounds (I’m hoping part of that was due to the fact that she hadn’t had her supplemental fluids Sunday like she usually does – I had done them Saturday instead).

So, I went about the rest of the week, and Tini did ok, and seems to like her new green pea and venison food, but she was pretty grumpy.  Oliver got the brunt of it, but I felt bad because she was clearly feeling out of sorts – she normally doesn’t beat up Oliver constantly.  I was beginning to feel like I needed to referee; she was squabbling with him over and over, and not just at mealtime!  I got the results back later this week, and talked to Kim about the bad attitude when she called.  It seems Martini is now dealing with a case of pancreatitis, and the grumpiness is likely due to the pain associated with it.  So it was off to the vet to pick up supplies – a new painkiller medicine, more green pea and venison, a bag of lactated ringers and IV tubing and needles.  I feel like I’m becoming a pretty well stocked pharmacy! 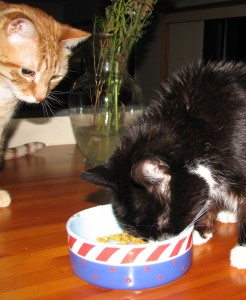 Oliver Likes Green Pea and Venison Too – Good Thing Tini is Focused or She Would Be Beating Him Up!

The pain med seems to be taking the edge off her bad attitude, so hopefully peace will return to the house.  I hate that she hurts, and I hate that she can’t tell me.  The good news (I hate that this is good news) is that Kim doesn’t feel that the pancreatitis should get in the way of Monday’s dose of chemo.  She has to have another complete blood panel a week after that, and this time it needs to be a fasting panel – Tini’s not going to like that, and unfortunately Oliver will pay the price!

10 thoughts on “Chemo Kitty Gets Love and Other Drugs”