At the end of September, I had a conference over in Chelan, Washington.  I headed over with my coworkers on Tuesday, and attended the conference session from Wednesday through noon Friday.  Jon then took Saturday off from work and drove over Friday after he finished work to meet me.  Chelan is east of the Cascade mountains in Washington and typically gets hotter drier weather than we do in Western Washington.  This year the temperatures were nice, but not overly warm.  I could walk around in a skirt and t-shirt and be quite comfortable – which typically isn’t the case at the end of September at home.  But sadly, there wasn’t much sun to be found.  Because even though the sun was up there in the sky, it was obscured by the thick smoke in the air from the nearby wildfires.

Friday after Jon arrived, we spent the afternoon wandering around the shops in the downtown business area.  Chelan has about 3500 year round residents, and the population balloons by several thousand during the summer.  But with the season winding down, and the heavy smoke in the air, it was certainly less busy than I think it would usually be.  After wandering around and checking out the shops, we decided to head out to Tsillan Cellars to go do a wine tasting.  I had their Sinistra wine a few years ago, and it is one of my favorites – but I hadn’t tried any of their other wines for a couple of years.

Tsillan is on the main drag just outside of town – up on a slope overlooking the lake (although you couldn’t see down to the lake because of the smoke).  They grow some of their own grapes, and some they truck in from the Yakima Valley.  For a $5 tasting fee, you can sample five wines (they did pour us a sixth though).  Jon and I shared a flight, and we started with the 2009 Estate Chardonnay.  This Chardonnay had a nice light butter flavor, but without being too heavily oaked.  It was one that we could both agree on.

Their 2009 Estate Riesling was very floral at first taste, but then settled into a rich pear flavor with the taste of vanilla.  It was a drink now wine.  The 2011 Bocciolo di Rosa was a light Syrah based Rosé with flavors of honeydew melon.  It had a light sweetness, and did not have much acidity.

The 2009 Bellissima Rossa is a Syrah Merlot blend, with big structured tannins and flavors of smoke and caramel.  The 2009 Reserve Syrah had even bigger tannins, and tasted of brown sugar, ripe cherry and lots of prune.  I liked the wines more than the reds at Tsillan, with the exception of the Sinistra that I love so much, but sadly it is sold out for the season! 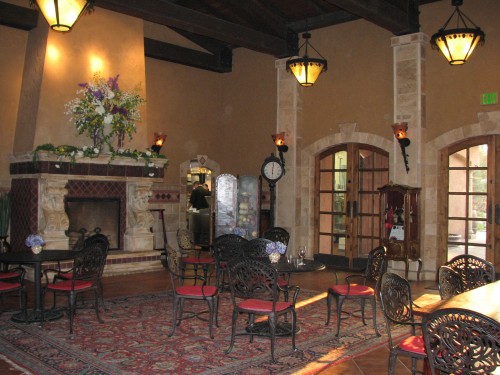 After the winery, we pondered what to do about dinner.  Tsillan Cellars has a large Italian restaurant at the winery, but neither of us felt like eating heavy Italian food.  We decided to head back to the hotel and walk somewhere downtown.  We asked around for some other suggestions, and everybody kept recommending Local Myth Pizza.  It is apparently the best pizza ever – based on the numbers of rave reviews I have heard!  I’m convinced that these pizza place owners are true geniuses and are paying people off for the recommendations, because to be honest, I had their pizza a few days before and just was not that impressed.  It was one where you had to blot the oil off the top before you could eat it – with the New York style flat crust.  Jon is not a fan of heavy, greasy foods on his best days, so I knew there would be no way he would like it.

We decided to go to a place that served burgers and salads called BC MacDonald’s.  We both had salads that were nice and big, and Jon had a glass of wine.  My iced tea was good too.  The ambience was not great – there were two men in the bar arguing loudly, but the server was fast and attentive and we both left satisfied with our meals.  But the reviews on BC MacDonald’s are mixed, so I could easily see having a much worse experience than we did.

After dinner, we headed back to the hotel and relaxed with some wine and TV watching.  Vacation is the life!

It was a beautiful morning for a hike at the Stimpson Nature Preserve. The woods do my soul a world of good... #hiking #girlswhohike #nature #OptOutside #PNW #summer
Waiting for the vet to open to drop the cat. Don't worry he's ok; just getting some stitches to close up a stubborn wound that won't heal. #selfie #FridayFeeling #almosttheweekend
The Runestone Museum in Alexandria, #Minnesota had an outdoor village of historic buildings, and a replica Viking ship! A Runestone was found here in the late 1800s, purporting to have been carved by Vikings exploring near here in 1362. Did the Vikings really get this far into the Americas? Since its discovery in 1898, the stone has sparked a lot of debate and claims of A hoax. It was fun trying to decide! #History #Vikings #BirthplaceofAmerica #historicsites #runestone
Out and about #selfie. Got my sunglasses fixed! #runningerrands
This morning's moody #sunrise, compliments of "the marine layer"... #landscapephotography #PNW #mornings
Last weekend I finished my latest #puzzle... #relaxing #metime
Abstract... #art #artphotographer
Fort Sisseton in #SouthDakota was established in 1864. It never saw combat, and was the home of 2 companies of Buffalo Soldiers in the 1880s. The Buffalo Soldiers got their name from Native Americans who compared Black soldiers' hair to that of their revered bison. Fort Sisseton is so beautiful, but remote even now! #FortSisseton #BuffaloSoldiers #historicsites #History #tourist #exploring #Wanderlust
Visited the Stearns History Museum in St. Cloud, #Minnesota. They had a demo on weapons of WWI & WWII and camplife in WWII. It was neat to check out! #History #WWI #WWII #exhibition #historymuseums #historynerd
I loved my visit to Munsinger and Clemens Gardens in St. Cloud, #Minnesota. There are both formal, and more natural gardens. So pretty, and it is free! #MunsingerGardens #StCloud #garden