What a birthday!  We got to Detroit just before 6 am Thursday morning, after taking a red-eye from Seattle.  When we arrived on my birthday, I was a bit groggy from the Dramamine still.  I did get a little bit of sleep during the flight, but the overnight flight was much harder on me this time than it was when we went to Georgia in June!  I guess now that I’m a year older, I don’t recover as quickly (HA HA!)

We got some tea and coffee and picked up our car – which took awhile (in fact I’ve never had a car rental take so long! – they were EXTREMELY thorough – annoyingly thorough), and headed out on our way.  We thought we would plug our first destination into the GPS, be on our way and find a place to stop for breakfast along the way.  Well, it didn’t really work out like that.  Pretty soon we were in the middle of downtown Detroit (and not a nice section at that…) and there were not any restaurants to be found.  We finally had to settle for McDonald’s.  Eh… birthday breakfast was a bit of a letdown!

Our first destination was the Motown Museum, but after breakfast, we still had an hour and a half to kill before the museum opened.  The Motown Museum is in a section of Detroit that is in the immediate vicinity of several abandoned homes and boarded up businesses.  In the morning, you don’t feel like you are going to be mugged, but I don’t think I would want to be in the area at night.  And I certainly didn’t want to spend an hour and a half walking around the neighborhood – although normally walking around neighborhoods is a favorite activity of mine – this would not be the place for a stroll.  So we backtracked out to a shopping mall in a safer area and did a little browsing.  And we found some great clearance deals on some clothes – icing on the cake!

So after killing an appropriate amount of time – it was back to Motown we went!  A bit of history on Motown for you…  Motown was the second record label founded by Berry Gordy, Jr., who borrowed $800 from his family’s savings fund to start a record company (the first label was Tamla).  The company was founded in 1959 and throughout the 1960s and 1970s was run from a home in Detroit, with a studio that was a converted garage in the back of the house.  The home was nicknamed “Hitsville U.S.A.” and is still called that today. 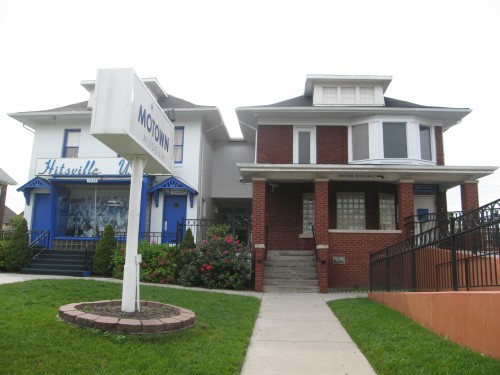 The Motown Museum in Detroit, Michigan

Berry Gordy, Jr. was very strategic about how he operated his business, and made it his mission to fully transform his artists into stars.  When he signed an artist, they went through a very thorough process, that included voice lessons, etiquette lessons and dance choreography.  He also understood that artists were still very much judged by the color of their skin, so in the beginning he released records that did not have a photo of the artist on the cover.  That way, people wouldn’t dismiss it without even listening to it.

Radio stations in the 1960s frequently had a policy to not play more than three songs by any one label each hour, so Berry created multiple labels to get maximum air time.  Over the history of the company, Motown Records had over a dozen individual labels.  Creative way to get maximum exposure!

Other innovations in music recording included an echo chamber, which was basically a hole in the ceiling that echoed back sounds when people made noise underneath it.  If you snapped your fingers, or stomped your feet while standing below, the sound would echo and have more volume and substance.  Motown hired high school students to snap fingers on recordings.

The tour of Motown Records and Hitsville U.S.A. included the early administrative offices of the company, the recording studio, and the upstairs living quarters where Berry Gordy, Jr. lived before buying a mansion in the Detroit historic district.  The furniture throughout is original, and very early 60s. Back in the 1960s and 1970s, it was very much a simple family operation, boxing records for shipment at the dining room table.  And Smokey Robinson frequently spent the night on Berry Gordy Jr.’s couch when he was too tired to drive home after a late night recording session.

It was neat to try to imagine all the stars whose music we have heard over the years recording their music here.  Stevie Wonder, The Four Tops, The Temptations, Diana Ross, Michael Jackson and the Jackson 5, and many others!

Many of the Motown Stars

The tour begins with a video about the history of Motown, and has lots of fun video clips and historic photos.  Then they take you upstairs for the guided tour.  It is interactive, with our guide bursting into song and trying her best to get all of us to sing too!  Actually, although I am not a singer (you cannot get me drunk enough to sing karaoke), I did sing along – albeit quietly!  She demonstrated how the echo chamber works – and showed us where stars stood while recording in the studio.

If you find yourself in Detroit looking for something to do, I would recommend the Motown Museum.  It was a fun way to spend an hour!

3 thoughts on “Detroit: The Motown Museum”