In the last installment, Jon and I traveled through Yakima and Goldendale on the way to Hood River….

Once we got to Hood River, we found our home for the night, the Hood River Hotel. It is a historic hotel on the National Register of Historic Places, and began its life in 1881 as the Mount Hood Hotel, a wooden structure in the other half of the block where the current hotel is now. The brick building that exists today was built in 1912 – the original wooden part of the hotel was torn down in the early 1930s. The hotel fell into disrepair over the years, but fortunately, someone saw the value in this beautiful old building.  It was restored in the 1980s, maintaining the historic features of the hotel.

This year is the hotel’s 100 year anniversary (although the original building that was torn down was older), and they are doing specials to celebrate.  Any room for $100 – even suites!  We checked in and found our room – we even got a real key – when was the last time you got a real key!? The room was a suite – kind of the extended stay room of a hundred years ago – with a full kitchen, sitting area and walk-in closet. The bathroom and kitchen were a bit dated, but that goes with the territory at a historic hotel. It even had radiators! 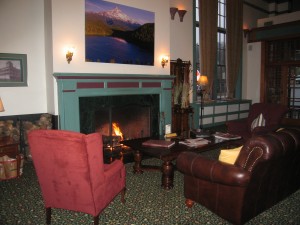 We didn’t stick around for too long though, because we wanted to get a bite to eat and see a little bit of town. We headed over to The Pines, a tasting room downtown. I went for the tasting and Jon had a glass of their Syrah. I enjoyed the wines I tried, with Jon’s Syrah being my least favorite. Jon tried each of the wines I had, and he loved their Old World Zinfandel, from vines planted in the late 1800s. Our server gave us some recommendations for dinner, and we headed over to Brian’s Pourhouse, several blocks up the street. Getting there was a challenge, because the rain was coming down in sheets at that point. Reading the street signs as we walked up the hill was difficult, but we made it there. Brian’s Pourhouse looks fancy when you enter, and the menu has several higher priced entrees to choose from. However, they also have very reasonably priced meals, including the Philly cheesesteak I had and the fish tacos that Jon tried. We also had an appetizer of mussels cooked in a coconut milk sauce. Everything was delicious! But the walk home was only easier because it was downhill – it was still dumping sheets of rain… 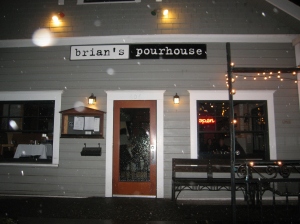 Back at the hotel, I discovered that the hotel being close to the train tracks was about to become a BIG drawback. Jon had called in our reservation rather than booking over the internet so he could ask specifically about the train for me, because we had read about it in reviews of the hotel. We were assured that it would not be a problem. Well, it was. A big problem. I did not get much sleep with the trains coming by frequently all night long. I didn’t time them, but I would guess they came by every half hour.  It didn’t help that right before bed, Jon started telling me about how the hotel was haunted, and that he had read about it online.  I knew he was joking, but it still weirded me out…  Jon managed to sleep through several of the trains (lucky bum!), but did wake up at times. Saturday morning came too early…. As much as I loved the history and the character of the Hood River Hotel, I don’t think we’ll be staying there again – the trains were just too much. Each room comes with a $10 credit for breakfast at the hotel restaurant though, and the breakfast was excellent! 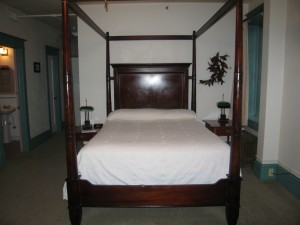 Room 106 at the Hood River Hotel

Our Stylish Kitchen at the Hood River Hotel

After breakfast, we wandered around Hood River for a little while, checking out the shops and art galleries. We found a little shoe shop that had some sale shoes, and Jon and I each found a pair that we liked.  We enjoyed wandering around, and could have stayed a lot longer, but soon, it was time to get back on the road.  In my next post, I’ll fill you in on the used car salesman of wine!

2 thoughts on “President’s Day Weekend – Part 2 – The Hood River Railroad in My Room!”