The third full day of our short vacation, we made a reservation for a hotel on the beach in Gold Beach, Oregon.  This is further down the Oregon Coast than Jon or I had ever been, so it was a chance to see something new.  But first we had to get there from Medford.  Who knew what an ordeal that would be.

I knew the road that went directly from Medford to Gold Beach was a smaller road – not a highway.  Even some of the highways are really more like country roads.  But given that the GPS had gotten us lost the day before, I double checked the directions the GPS gave us with Expedia directions.  And I talked to the hotel clerk too.  She said, “It’s a small road, but it’s not a bad road.  It is paved the whole way.”  MMMM… HMMM….

So off we went on our way to Gold Beach – we stopped for gas, got some coffee for Jon and set out.  We drove through some scenic countryside and then we got to the road… Bear Camp Road – aka the Coastal Route.  At some point you hit the end of the county road, and end up on the National Forest Service road.  Which doesn’t necessarily have to be a bad thing, considering that the roads in the National Forests are Forest Service roads.  And then part of it is a Bureau of Land Management road.  I know nothing about how the BLM maintains its roads…  The one thing that this road had going for it is that there are signs along the side quite frequently marking the Coastal Route.  There are mile posts too – although that isn’t all that helpful when you don’t know which milepost will mark the end of this hell on earth, but we didn’t know that yet… 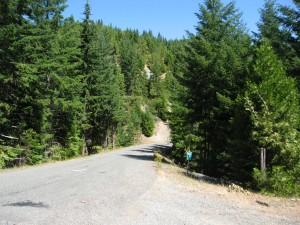 The Not So Bad Part of Bear Camp Road

So, up we go – and it was paved – and we continued up and up and up.  Basically we were driving straight up a mountain – well really anything but straight.  At first, the road isn’t very narrow and there are other cars and you feel ok about it.  Until you don’t.  Once you get up to the top of the mountain, the road has gradually narrowed down to one lane, with turnouts.  There were hairpin, blind curves, no guard rails and a sheer cliff drop off.  There are logging spurs turning off every so often, and still you have the blind curves.  Every curve is sheer terror, because you don’t know if another car is coming.  Did I mention the cliff and the lack of guard rails?  You are on a tiny one lane road, driving along the edge of a ridge, with nothing but a drop off the side of the road.  Really the scenery is quite beautiful; as you are looking out over miles and miles of forest, it reminded me of some of the hikes that Jon and I have gone on around home.  But the problem is that you are so terrified you can’t take your eyes of the road for a split second to enjoy the view. 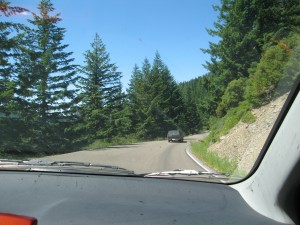 Along the Ridge – This Photo Doesn’t Do Justice to the Narrowness of the Road, or the Cliff

Side Note:  In the photo above we are driving behind a truck from Wisconsin.  I wondered to myself what they might be thinking of Oregon and the crazy roads!

Jon was driving and I know he was as nervous as I was.  And for me, well this was one of the most terrifying experiences that I have had in my entire life – I’ve never had panic attacks, but on this trip I think I was close!  The entire trip took a little more than three hours.  We were up on the mountain for about two and a half hours of the total trip.  Two and a half hours of white knuckle, afraid to look down, hold your breath around every corner, driving.  The strangest thing was that it really seemed like the Oregonians intend for this to be a regular route.  As I mentioned before, there are milepost markers every mile, and signs every couple of miles marking the Coastal route. There are signs stating the road can be closed in the winter, and isn’t a good route for winter driving.  Hello?  This isn’t a good route for summer driving!  But strangest of all, there are well constructed viewpoint turnouts.  You know the kind that were typically built by the CCC with rock blocks or sandstone?  Yeah those – quite pretty really.  We couldn’t understand why they were built along a Forest Service road or Bureau of Land Management road.

So when we finally got off the mountain and into Gold Beach, our nerves were so frayed that we both needed a drink.  Never mind that it wasn’t yet 2 o’clock.  We went to the Porthole Café for lunch, and we each ordered a beer.  And we split a second one.  The seafood we had there was quite good – I had the sampler platter – but we NEEDED the beer.  We sat there for awhile, just decompressing and savoring the fact that we were still alive!

Jon talked to his mom later that day on the phone and told her about our harrowing journey.  That was when she told us that one of the logging spurs off of Bear Camp Road was where James Kim died.  C’mon, you remember the Kims right? Everybody remembers the Kims.  They were the 30 something couple from San Francisco who were driving on the Thanksgiving weekend in 2006 from Portland to Gold Beach with their two little daughters.  It was night, and a snowstorm was rolling in, and they tried taking Bear Camp Road.  After getting stuck in the snow, they waited for 8 days to be rescued.  Finally resigned to the fact that no one was coming, James Kim tried to hike out, and died of hypothermia. Kati Kim and her children were lucky enough to be rescued, although they were suffering from frostbite, hypothermia and starvation.  That was the road.

So that was our trip to the coast on Bear Camp Road – NEVER AGAIN!  Knowing that our drive took place in the late morning of a perfect sunny summer day, I am absolutely convinced that you would have to be insane to drive on that road in the winter, and even more insane to attempt it in the winter, in the snow, in the dark and with a two wheel drive car.  What happened to the Kims was really a tragedy, but Jon and I have wondered more than once how or why they ever went as far up the road as they did without turning around.  You won’t ever catch us on that road again.  Hopefully readers, if you are ever considering taking the “Coastal Route”, you will skip it and head over at Eugene instead.

More on Gold Beach in the next post, once I get a glass of wine. This post is giving me flashbacks!

8 thoughts on “Terror on the Bear Camp Road!”